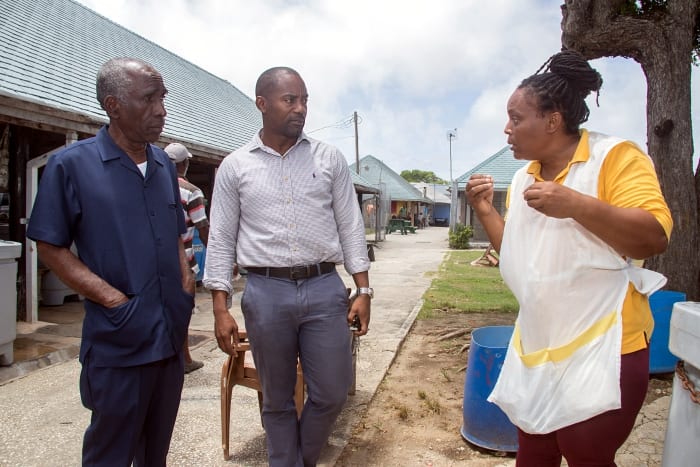 There is a need for Government to sit down with fisherfolk and prioritise issues presently confronting the industry and come up with viable solutions.

That is the assessment of Minister of Maritime Affairs and the Blue Economy, Kirk Humphrey, after he concluded a tour of the Berinda Cox Fish Market, Oistins, earlier this week, his fourth since assuming office.

“The issues here are similar to the issues that I heard at the other markets, which to my mind reflects the fact that in many ways the fisherfolk have not been treated well enough and we have to correct that,” he stated.

The Minister, who was accompanied by Permanent Secretary, Esworth Reid, and other officials, said fishermen operating from the Berinda Cox Fish Market highlighted issues related to the absence of a crane to assist them with moving their vessels in and out of the water.

He lamented the fact that some fishermen were spending as much as $3,000 to move their boats, when a crane was purchased since 2007, but never used.

However, the Minister noted that capital works would have to be undertaken at the market in order to accommodate the crane. He added that it would be a long-term solution which would be “somewhat expensive”, but was necessary.

In addition, the state of the jetty was also flagged as a cause for concern, as fishermen explained there was not enough capacity to allow heavy equipment to pass through freely, resulting in them manually dragging their fish to the market when there was a catch. “That is not good enough in a 2018 Barbados and that is something we have to address,” Mr. Humphrey contended.

He also took issue with the general working conditions under which the vendors operated, stating that decisions had to be made to resolve the issues, particularly as it relates to having access to proper drawers and cupboards. “We have to come up with solutions that are meaningful, that will work; and that will involve the voices of the people,” he maintained.