Government To Stamp Out HCFCs By 2030 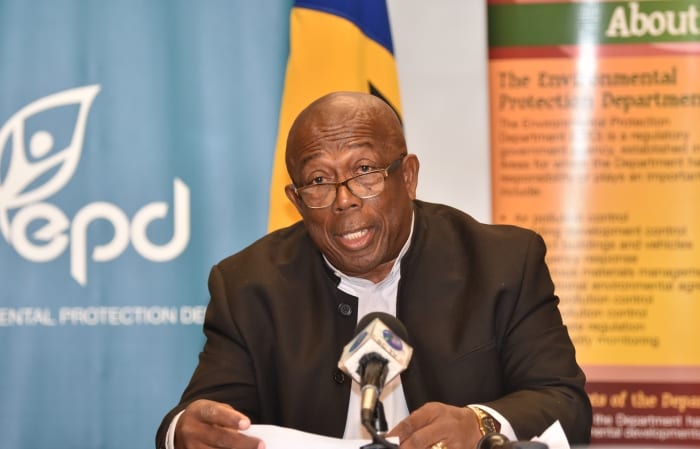 By the year 2030, all products containing hydrochlorofluorocarbons (HCFCs) should be phased out in Barbados.

And, in the short term, Government is looking at reducing local consumption of these harmful chemicals, which damage the ozone layer by 35 per cent, within another two years.

Minister of Environment and National Beautification, Trevor Prescod, said these were the targets of the Ministry’s National Ozone Depleting Substances Phase-Out Management Programme. He was speaking on Wednesday at the Scholarship and Awards Presentation in Celebration of International Day for the Preservation of the Ozone Layer, held at the Lloyd Erskine Sandiford Centre, Two Mile Hill, St. Michael.

International Day for the Preservation of the Ozone Layer will be observed globally on Sunday, September 16.

Stating that Barbados was a party to both the Vienna Convention for the Protection of the Ozone Layer and its Montreal Protocol, Mr. Prescod pointed out that Government had taken a multi-sectoral and multi-disciplinary approach to phase out ozone depleting substances.

This included the implementation of a number of projects, such as the formation of the Refrigeration and Air-conditioning (RAC) Association of Barbados, the establishment of the national import/export licencing system, and phasing out consumption of chlorofluorocarbons (CFCs), halons and carbon tetrachloride.

The Environment Minister said that in order to accomplish this, Government and operators in the RAC sector must continue to work together to ensure that the transition from the use of HCFC technologies to those that are non-ozone depleting, climate-friendly and energy efficient, occurs with the least amount of “issues and frustration”, while still delivering the required RAC services.

However, he added that the global phase out of HCFC refrigerants had resulted in the rapid increase of the use of hydrofluorocarbons (HFC) as alternatives.

“Though HFCs are non-ozone depleting, they are powerful greenhouse gases and significant contributors to global warming.  In recognition of the history of success associated with the [Montreal] Protocol, as well as noting that the uncontrolled use of HFCs in the RAC sector could negatively impact on global efforts to combat climate change, the international community agreed to their regulation under the Protocol with the signing of the Kigali Amendment to the Montreal Protocol on October 15, 2016.

Estimates are that implementation of the provisions of the Amendment will avoid up to 0.5 degrees Celsius of global temperature rise by the year 2100.

“Barbados has since joined with the international community in this endeavour by ratification of the Amendment on April 19, 2018.  In doing so, we are expected to establish a HFC consumption baseline by 2024 and to sequentially reduce our consumption by 80 per cent by 2045.  As an initial response to establish compliance with Kigali, the Ministry is currently working on including HFCs on the import and export licencing system under the Custom Act Cap 66,” Minister Prescod disclosed.

He said while Barbados transitioned towards the use of non-ozone depleting, climate-friendly and energy efficient refrigerants and refrigerant technologies in the RAC sector, the effort would take continued cooperation and support from all stakeholders.

He implored RAC companies and technicians to exercise good refrigeration and air conditioning service practices; comply with the requirements of the import and export licensing system; participate in training, education and awareness raising activities; promote and facilitate the changeover of RAC technologies; dispose of derelict appliances appropriately; and maintain avenues for continued dialogue.

Mr. Prescod said these actions would ensure that Barbados contributed to the cause of the Montreal Protocol, as well as reduce energy consumption and save valuable foreign exchange over time.

Tags: Hydrochlorofluorocarbons, International Day for the Preservation of the Ozone Layer, Minister of Environment and National Beautification, Trevor Prescod