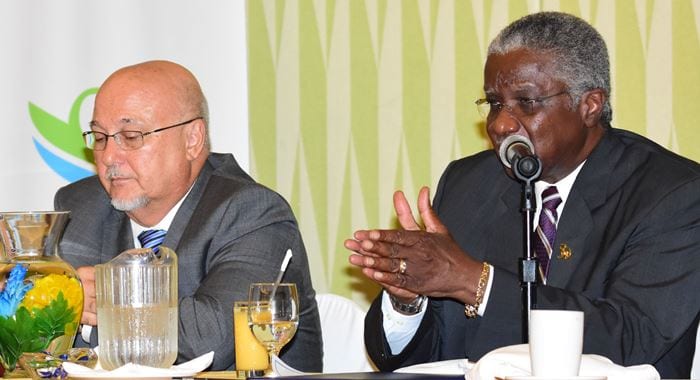 Prime Minister Freundel Stuart has given the assurance that Government will continue to take the steps necessary to ensure that the country achieves, over time, the goal of bringing the deficit below the rate of growth of the economy.

He made the comments recently while delivering the feature address at the January 2017 Business Luncheon of the Barbados Chamber of Commerce and Industry, at the Hilton Barbados Resort.

Mr. Stuart stated: “To achieve this [reduction], we must begin by returning to a current account surplus as soon as possible and eliminate Government’s reliance on Central Bank financing of Government’s deficit. These measures will be broad based, inclusive, and most of all, responsible, utilising both traditional and non- traditional means, including, for example, voluntary debt refinancing for which we now have firm and credible offers on the table.”

The Prime Minister stressed that as they head into preparations for Government’s new budget for 2017-2018, he and his team were well aware that based on where they were at present, they would have to move with “more alacrity” to reduce the deficit and eventually the debt.

He urged the continuation of efforts to make linkages between the tourism and other sectors, even as Government moves apace with restructuring, particularly in the renewable energy sector, cultural industries, and in the creation of an environmentally- friendly green economy.

“We believe that other private sector operators should seek to work more closely with the tourism sector’s representatives, including the Barbados Hotel & Tourism Association, to see [how the] needs of the sector can better be met by the services and goods or products that they provide,” he suggested.

Mr. Stuart pointed out that the call for resilience by Barbadians was even more imperative, given two recent events that had shaken the existing world order.

He identified them as Brexit, with the promise of a new “Global Britain”; and the inauguration of a new United States Administration with the declared “America First” commitment.

“These two major events, which will affect us all, bristle with both challenges and opportunities for the public and private sectors. We must use our creativity and versatility as a nation to make the changes that are necessary for our survival,” he said.