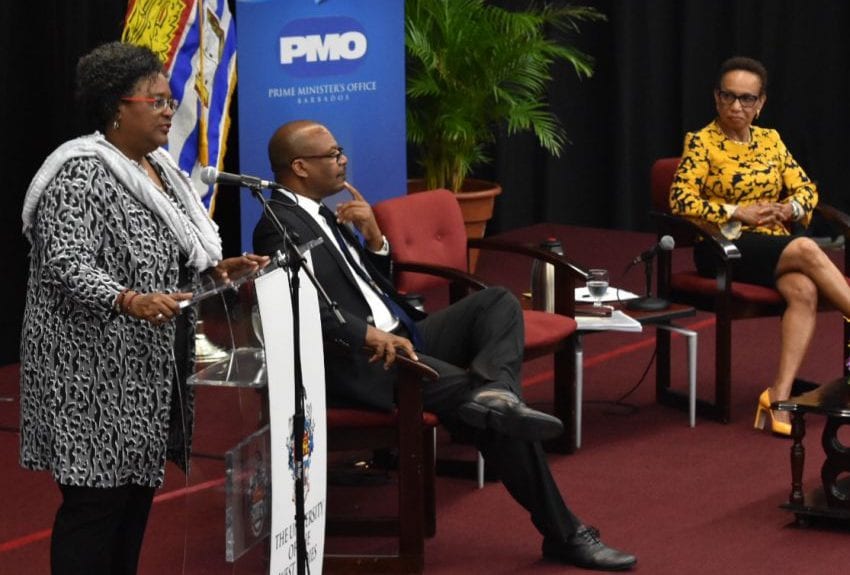 Prime Minister Mia Amor Mottley has emphasized the importance of the recently negotiated debt restructuring programme, saying it has saved the country in a number of ways.

Ms. Mottley made the comments last evening when members of staff and students of the University of the West Indies, Cave Hill Campus, had “A Conversation with the Prime Minister”, in Lecture Theatre 1 of the Roy Marshall Teaching Complex.

“A lot of lashes came…to us on the debt restructuring. I almost feel that Barbadians don’t appreciate how difficult this moment in time is for this nation because the Government has made it almost seamless for you…. We have just

entered into a debt restructuring programme that will save the Government of Barbados the equivalent of 10,000 public servants’ salary a year; 500 million dollars in interest.

“Now if I did not have the luxury of negotiating that debt restructuring programme, I regret to tell you that it is not only the students up here that would not be receiving an education; it is not only the faculty up here that would have gone home but it is also two-thirds of the central government…that would have gone home in this country. Now I will speak further to this this weekend because the country needs to stop and to pause and understand where on the precipice it has found itself,” she stated.

The Prime Minister encouraged those at Cave Hill to exercise leadership and speak to the country on some of those issues. She acknowledged that the debt restructuring programme has been difficult for everybody, including the pensioners.

She again stressed that the burden must be shared fairly, noting that she inherited $1.9 billion in arrears. She pointed out that for the last 10 years the banks made $1.5 billion in profits. 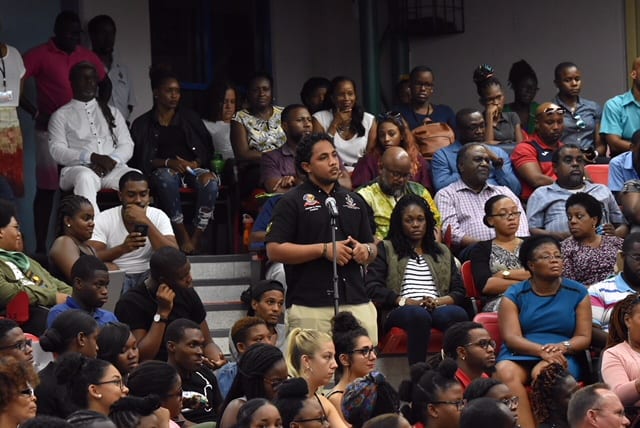 Government recently commenced its programme for restructuring the public service and reducing expenditure in this adjustment exercise and Ms. Mottley said it had not been easy.

“Nobody likes to lay off people and believe you me, it has been the hardest thing that I have had to do as a public official to agree to persons being laid off…. It bleeds my heart….

“I am establishing a Household Mitigation Unit because I will not sleep well until all like you who have been the victim of layoffs in this country are put back in a position to structure yourself and you are living in a way that is credible and brings integrity to you and your family. And I give you that commitment,” she assured.

The Prime Minister said some Government security guards went home last week with their cheques, but regrettably, some Ministries did not give the displaced workers their cheques.

“Am I happy about it? Absolutely not, but to say that is a representation of the entire public service is a lie and this notion that you are going to continue to badger and attack public servants for conduct is something that I have said to the head of the civil service he needs to come and defend because Barbados has some excellent public servants and…we have had a comparative advantage because of this.

“Do we get it right all the time? No.… Can we find a more effective way to do some of the things in the public service …? Yes, we can. But regrettably, we have not done it this going down as perfectly as we should have…,” she stated.

Ms. Mottley stressed that Government was trying to correct the situation with minimum dislocation to everyone.