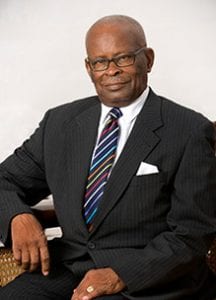 On leaving the Coleridge and Parry School, he entered the public service of Barbados as a Clerical Officer in 1952, before proceeding to London where he entered the
Inner Temple to read for the Bar Finals Examination. He later enrolled as an external LL.B student of the University of London. After graduating as a Barrister, he lectured in Law at the Holborn & West London Colleges of Law.

On returning to Barbados in 1966, he was admitted to practise law at the Local Bar. He then entered the Legal Service as Deputy Registrar of the Supreme Court, became a Magistrate in 1968 and was promoted to the position of Senior Crown Counsel, Attorney-General’s Chambers. Between 1970 and 1973 he was Principal Crown Counsel, and in 1976 became Deputy Director of Public Prosecutions.

He is a member of the St. Stephen’s Anglican Church and represented that church on the Synod Council for several years. He spends his spare time gardening, sea bathing and reading the autobiographies of international political leaders.

In appreciation of his long and outstanding service to the legal profession and the judiciary, Justice Belgrave was awarded the Companion of Honour of Barbados (CHB) in 1993 and he was awarded the Knight of St. Andrew (KA) on June 1, 2012.