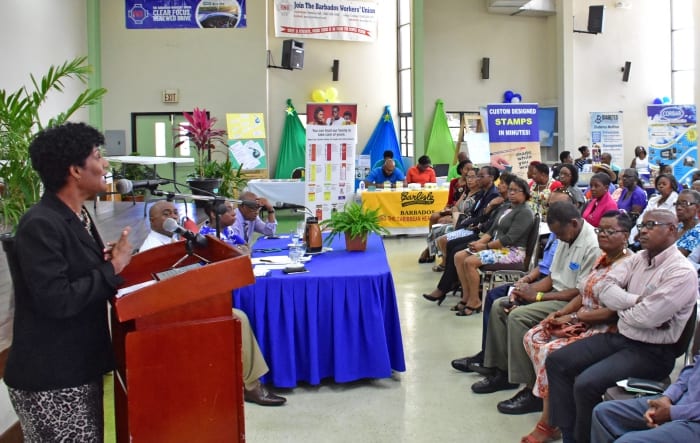 Government is playing its part in creating an environment that is conducive to the development, empowerment and prosperity of this nation’s young people.

This assertion came today from Minister of Labour, Dr. Esther Byer Suckoo, as she addressed the May Day 2018 Launch, at the Barbados Workers’ Union, Solidarity House, St. Michael.

Dr. Byer Suckoo stressed that the various ministries had developed programes which engaged youths directly or assisted in creating conditions for them to thrive, survive, learn and earn.

“Every Ministry is doing something to engage and empower our young people. So we look to the youth of the nation; they will be the problem-solvers, innovators and game changers who will move this nation forward. But they will not be able to become good citizens without proper guidance and instruction from the home and community, with the support of Government, civil society and other organisations,” she insisted.

She urged parents to spend time with their children, listen to them, give advice and get to know their issues. She noted that she did not support the view that children should be left to figure out for themselves when they were old enough what was right and wrong.

The Minister pointed out that there were a number of values Barbadians thought the country had lost but needed to regain immediately, as was reflected in the Barbados At 50: The National Values Assessment 2016 Report, which was commissioned during the 50th Independence celebrations.

She recalled that the report highlighted some of the lost values as: obeying the law, being in a committed relationship, respecting men and women, being respectful to people and those in authority, honesty, loyalty, forgiveness, showing integrity, being modest, showing compassion, and being a hard worker.

Dr. Byer Suckoo suggested: “The loss of these values is what is at the root of the social decay that we lament, manifested in anger and violence among our young people, violence in schools and bullying…. All of these can be traced back to the fact that we let these values slip through our fingers.”