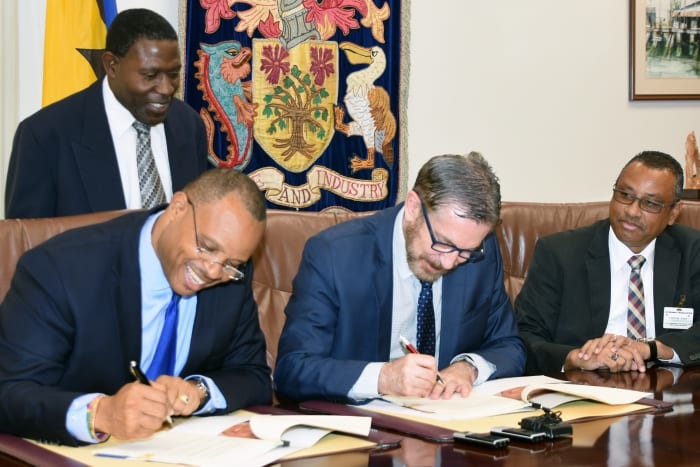 Shortly before signing the document, Minister of Finance, Christopher Sinckler, said the programme would be implemented over a two-year period at a cost of US$18.93 million, with Barbados providing US$3.93 million in counterpart funding.

Mr. Sinckler explained that the programme had three components, and identified them as the Integrated Tax Administration System for the Barbados Revenue Authority (BRA); providing scanners for the Customs Department; and support for the consolidation of tax reform in Barbados.

Emphasising the importance of those three components, he stated: “There are five tax systems which the BRA currently operates, including those for land taxes and income taxes, but unfortunately, there is no systematic collaboration and interface between those systems. This new system will address that particular issue and allow each of them to operate on a common platform.”

The Minister noted that the scanning equipment would be procured for the Grantley Adams International Airport and the Barbados Port Inc., to ensure they were adequately equipped, especially since Barbados depends very heavily on the tourism industry and international trade.

“In recent times, slow processing, due to manual operations by the Customs and Excise Department at both ports, has had a not so positive effect on the country’s image and also on the business of trade and commerce in the country. Therefore, we have had to take a very serious look at the reform process of these systems. Of course, this has been compounded by the problems of detection of dutiable items, but also contraband and illegal substances, much of which you have heard in the news recently,” he indicated.

According to him, the programme would promote a more efficient fiscal and tax management system, allowing for the reduction of evasion and an increase in fiscal revenue.

Mr. Sinckler stated that the objectives of the programme included increasing Customs’ revenue collection at the port and airport, through a more effective detection of dutiable items, and improving the level of detection of contraband at the ports of entry.

In addition, he stated, it would also support the Ministry of Finance and Economic Affairs and the BRA with studies to provide guidance on the consolidation of tax administration reforms.

Director Representative of CAF, Joel Branski, who signed the document, said the institution was pleased to provide the financial support for the programme. He noted that Barbados joined CAF in September 2014, and since then it had approved and disbursed US$85 million to the country.