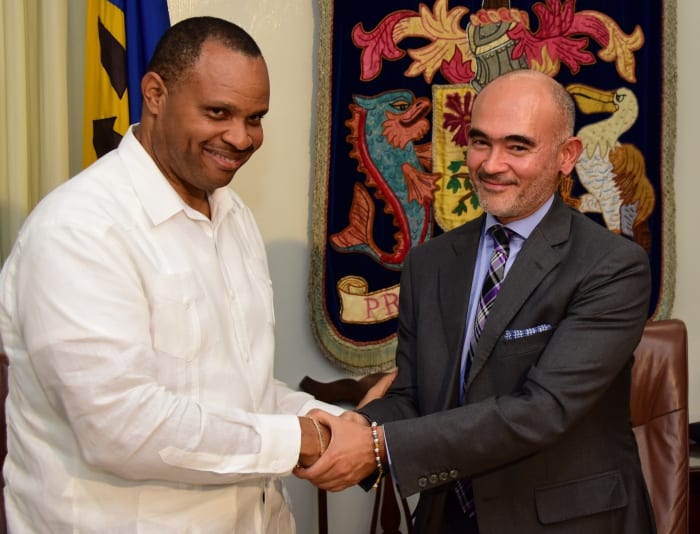 Government and the Inter-American Development Bank (IDB) have signed a US $34 million loan agreement to finance a project to use cleaner fuels and renewable energy in Barbados.

Mr. Sinckler said the programme would be implemented over a six-year period and highlighted the components as: Natural Gas Infrastructure; Smart Energy Solutions and Technical Advisory Services.

He explained: “The programme aims at enhancing Barbados’ energy security and sustainability by diversifying the energy mix through promoting the use of cleaner fuels, specifically natural gas for power generation; and increasing the use of renewable energy sources.”

According to him, the programme’s specific objectives include upgrading the natural gas infrastructure to ensure that the natural gas service to the country would continue at the high-quality Barbadians had come to know and expect.

He added that they wanted to increase energy efficiency/renewable energy applications within the National Petroleum Corporation and the Barbados National Oil Company Limited operations to reduce greenhouse gas emissions.

Mr. Sinckler added that Government’s vision was to have a sustainable renewable energy sector within the foreseeable future, with natural gas being the transitional fuel within this period.

The Minister thanked the IDB for demonstrating its commitment to Barbados and working speedily to get the project assessed and sent up to its Board.

Mr. De La Hoz Viñas described the project as part of a “longstanding and successful collaboration” in the energy sector with the Government.

He added that the IDB was working with Government to create a sustainable energy matrix, and with others in the region to promote vibrant economies and energy sustainability.