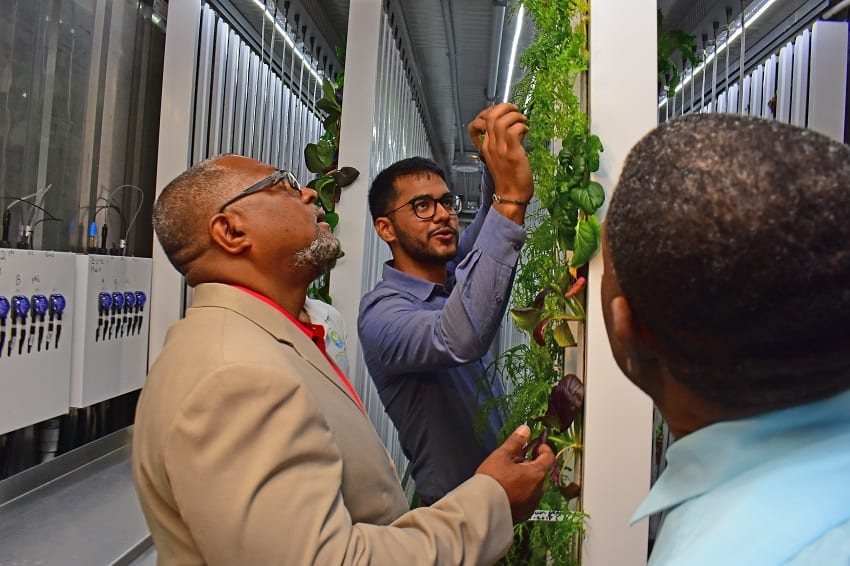 One of the directors of Ino-Gro Inc., Rishi Panjwani, showing Agriculture Minister, Indar Weir, some of the crops they grow using the aeroponics method. Looking on is Permanent Secretary, Seibert Frederick. (C.Pitt/BGIS)

Agriculture, as we know it, is about to change.  That is because the Ministry of Agriculture and Food Security is about to embark on an aeroponics project in the new year with local company Ino-Gro Inc.

This partnership will see crops being grown in climate controlled environments, and once it takes off, it could result in 80 to 90 per cent of the vegetables Barbados currently imports being produced locally.

Minister of Agriculture, Indar Weir, made the disclosure today after touring a climate controlled farm belonging to Ino-Gro Inc. at Hastings, Christ Church.  The company is producing the equivalent of 1.5 acres worth of produce in a high-tech temperature controlled 40-foot container.

“What I’ve said to [the directors] Rishi and Warren is basically this – I have a project that I want to roll out in January and I want you to work with me.  We are going to get together, pull all of the costing together and we are going to come with this type of aeroponic project where agriculture can be taken to the next level.

“More importantly, we need the scale.  Through what we discussed we are going to produce almost 80 to 90 percent of some of the vegetables that we are currently importing.  And when I speak about that, I speak about tomatoes and lettuce of all varieties and we will look at broccoli as well because [it] is one the few vegetables that we import and we have to address that.  If I am able to pull all of this together within a short time, we will then start looking at reducing our food import bill,” the Agriculture Minister said, following the tour.

Aeroponics is an indoor gardening practice in which plants are grown and nourished by suspending their root structures in air and regularly spraying them with a nutrient and water solution.  Soil is not used for aeroponics because the plants can thrive when their roots are constantly or periodically exposed to a nutrient-rich mist.

Stating that the whole concept was “very exciting”, Mr. Weir pointed out that Caribbean islands, like Barbados, had to look at the effect of climate change as they developed. He said Barbados was vulnerable to climate change and therefore needed to practise “climate smart agriculture” so that in the event of a natural disaster it would not be faced with food scarcity, but food security. 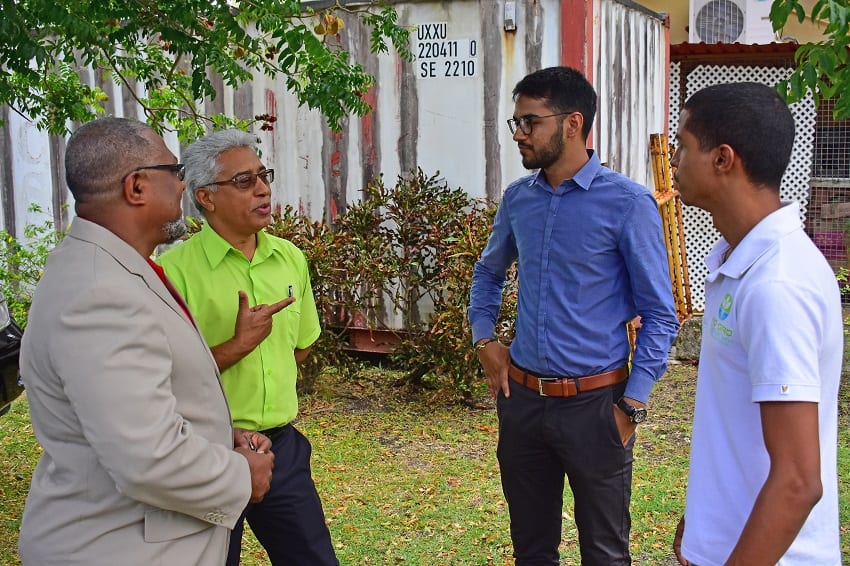 Additionally, he noted that the project was one way to get younger Barbadians interested in agriculture, as entrepreneurs.

“It is exciting because it excites the younger minds …. But, if we can replicate this all across Barbados, then all of a sudden we are addressing a 21st century need, where we can create entrepreneurs through having young people graduate from university and getting straight involved in projects like these as business people ….

“This is what I mean when I say we are going to transform how we treat agriculture. The future is bright and I am happy to meet these young men.  We are going to prepare a bright future for our young people in agriculture to ensure that we not only address issues of food security, climate issues, [and] food sovereignty, but also entrepreneurship and people empowerment,” Mr. Weir said, while disclosing that they would be looking at using bonds and not just containers to do the project on a wider scale.

One of the Directors of Ino-Gro Inc., Warren Kellman, said the 40-foot container ‘farm’ was fully automated and insulated, which meant no air could go in or out.  They currently grow a variety of leafy greens, and supply to the local hotel and restaurant sector.

He said he and fellow directors started the venture at the beginning of 2017, and it had been “going well” ever since then. “We grow four different types of lettuce, micro greens, edible flowers, [and] herbs – cilantro, mint and basil.  Mostly leafy greens for right now, but we are looking to expand into various crops in the coming year.  We are planning to take it to a commercial level, where we can supply the whole country,” he said.

His partner, Rishi Panjwani, said they started the business to cut down on the food import bill and to educate young Barbadians about the innovations in agriculture.

“It is no longer about being in the hot sun and breaking your back.  It has now become labour-efficient and it is easy.  We want to inform everyone to re-innovate the industry and get back into agriculture,” he emphasized.