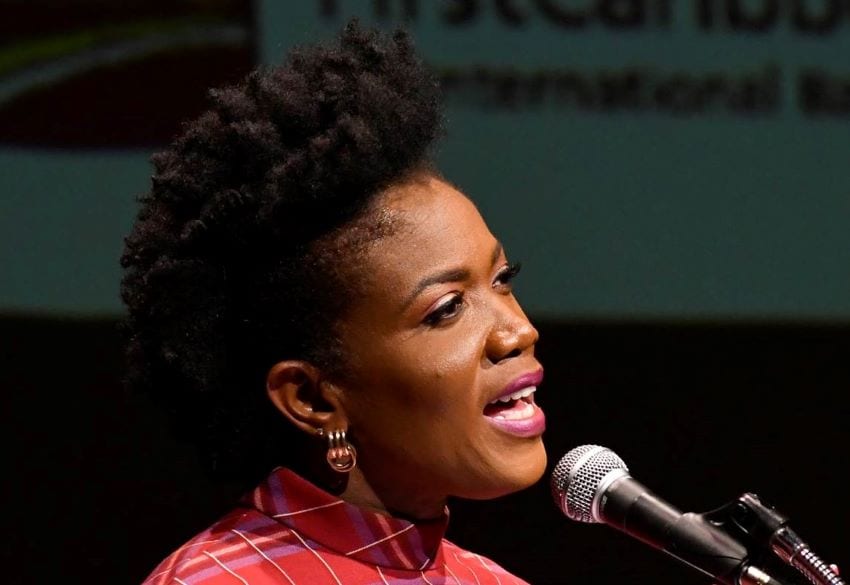 Minister in the Ministry of Economic Affairs and Investment, Marsha Caddle. (FP)

Minister in the Ministry of Economic Affairs and Investment, Marsha Caddle, believes that Barbados needs to build a climate-proof economy to combat the threat of total economic loss due to severe weather systems which affect the Caribbean annually.

Ms. Caddle made this point during the opening of the Green Climate Fund (GCF) Workshop on Financing Opportunities for Private Sector Investment at the Lloyd Erskine Sandiford Centre, Two Mile Hill, St. Michael, on Monday.

“When we talk about climate resilience issues, many of the approaches to date have really looked at and bargained for damages of a certain scale.  What we are facing in Barbados and in the Caribbean has to do with total loss issues.  Dominica lost 220 per cent of its GDP in a matter of hours.

“So, when we talk about mitigation and adaptation, we also have to bring to bear in the conversation real issues of disaster risk, of real resilience and real recovery. Together with our partners, we have to be able to address scale.  Many of the solutions and options on the table really are not built to face the fact that if we do have a very severe weather event, that we are looking at having to replace almost our entire economy, and so one of the things that we have to do is really build an economy that is climate-proof,” Minister Caddle said.

She praised the GCF, the world’s largest dedicated climate fund designed to help developing countries tackle climate change and reduce their greenhouse gas emissions.  The GCF places specific emphasis on the private sector. “Our engagement with the Green Climate Fund has been exciting; it calls for a high level of engagement.

“It is a partnership on which we rely mainly because what the GCF has been able to do, is to present a diversified financing product.  So, you are not only talking about loan resources or grant resources, but a blended approach to countries such as ours who may find ourselves in a difficult economic, social and institutional situation,” she said.

The Economic Affairs Minister explained that it was important to get representatives of the GCF, government and the private sector together since it was critical to put those with ideas with those who could mobilize resources to invest.  She further stressed that Barbados’ new growth and development model must embrace economic enfranchisement of every Barbadian.

“One of the things we have to get better at is matching those ideas with resources and achieving scale.  Our market is not just Barbados; our market is the region and the world….  Our strategy of engagement as a country means that from the emerging economies in Africa, which are the fastest growing economies in the world, to our neighbours in CARICOM, those are our markets.  And the role of the Government of Barbados is to facilitate engagement and penetration into those markets.  To facilitate the ability of the business sector to be able to grow as much and as widely as you could think, and you could dream, and then to get out of the way to let that happen.

“I think that the future of our economy, our society and the way we are going to rebuild the Barbados that all of us want to live in, is about matching ideas with opportunity and finance.  There is no end of great ideas, or of creativity in Barbados,” Ms. Caddle said.