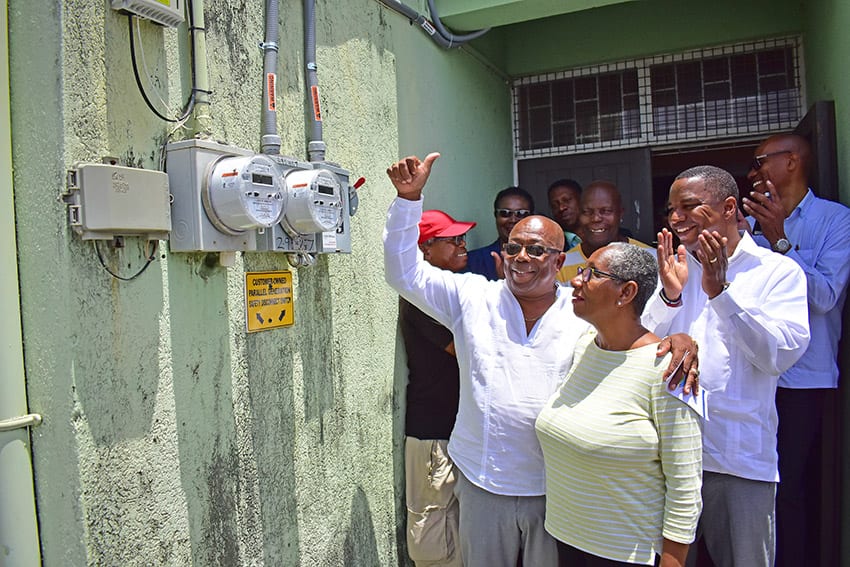 Minister of the Environment and National Beautification, Trevor Prescod, flipping the switch to launch the Ivy Community Centre’s new photovoltaic system, with assistance from members of The Ivy Community. Looking on are Minister of Energy and Water Resources, Wilfred Abrahams and officials of his Ministry. (C.Pitt/BGIS)

Minister of Energy and Water Resources, Wilfred Abrahams, quoted Helen Keller, as he expressed how excited he was to see the materialization of collaborative efforts between government, the United Nations Development Programme (UNDP) and the private sector.

Minister Abrahams’ stated: “The project not only helps to reduce electricity cost and reduce greenhouse gas emissions, but also acts as that proprietary step to secure our resilience when a disaster hits. In the event of a national disaster, Barbados is now one step closer to being prepared to bounce back quicker and respond to the needs of people within the communities.”

Another aspect of the DREAM Project is the collaboration with the TVET Council to develop occupational standards and curriculum to deliver a first level photovoltaic basic maintenance training course, which will be delivered through the Community Development Department’s approved assessment centres.

UNDP’s Programme Officer Energy and Environment, Allan Franklin, in his remarks pointed out that the $3 million project, which started in December 2015, and is scheduled to be completed in November of this year, has as its objective: “to reduce greenhouse gas emission through the use of renewable energy, and to strengthen Barbados’ disaster risk response by promoting decentralized photovoltaic electricity generation with battery back-up”. 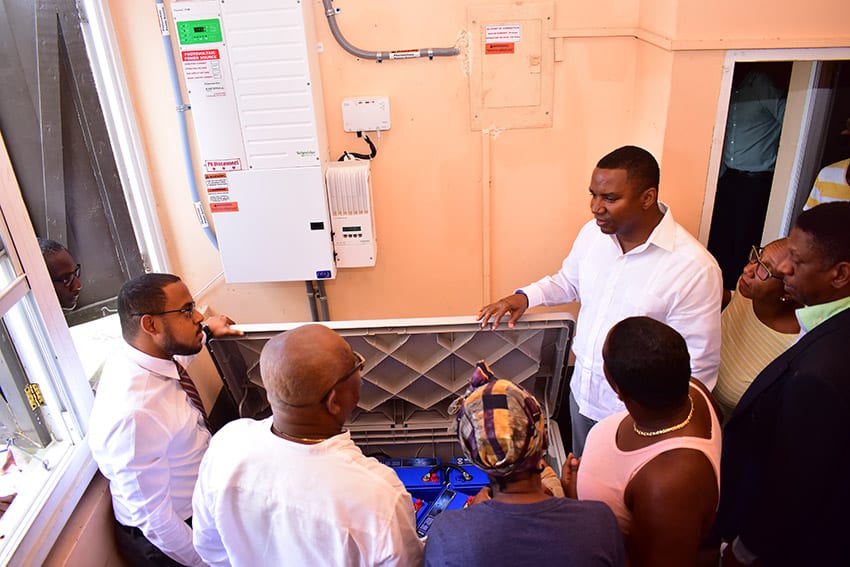 Minister of Energy and Water Resources, Wilfred Abrahams, explaining the benefits of the solar photovoltaic hybrid system to Ministry of the Environment, Trevor Prescod and other officials. (C.Pitt/BGIS)

Contractor responsible for the installation of the hybrid PV solar systems, Hallam Edwards of Enermax Limited, stated: “I am pleased to participate in this effort, which will contribute to government’s national efforts to replace fossil fuel through the use of renewable energy.

“These hybrid systems will supply electricity to the grid on a daily basis, but will also through battery storage, supply emergency power to the centres during outages.  This emergency power will be enough to support communications and other services, such as cell phone charges, lighting and refrigeration of medicines.”

The project, when completed, would have outfitted 22 community centres, resource centres and pavilions, as well as nine polyclinics with 170kW capacity hybrid systems.

Minister Abrahams thanked UNDP for facilitating the DREAM Project, other ministries involved in the project, as well as staff of the Ministry of Energy for their tireless efforts in implementing the ministry’s policies, especially as Barbados seeks to become energy independent, resilient and sufficient by 2030.