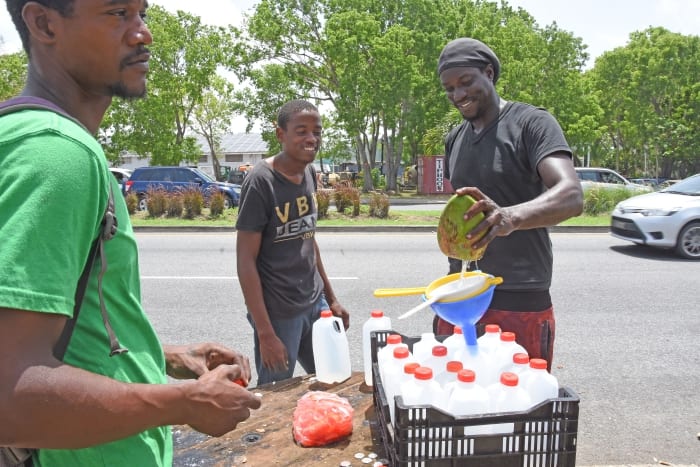 Coconut vendors in Barbados have been encouraged to adhere to a set of guidelines designed to improve their operations, as Barbados joins 10 of its Caribbean neighbours in developing the coconut industry at the local and regional levels.

The measures have been based on the local health services regulations, as well as recommendations coming out of regional stakeholder meetings. They seek to address critical areas, such as appropriate attire, cleaning and sanitisation practices, workspace and storage requirements.

According to Senior Environmental Health Officer, Richard Bourne, the objective was to protect the best interests of both the vendor and the consumer, in light of the thrust to create a viable coconut industry.

He was speaking following the culmination of a three-day training workshop for coconut vendors, recently hosted by the Ministry of Agriculture, Food, Fisheries and Water Resource Management at Graeme Hall, Christ Church. It was the result of the collaborative efforts of that Ministry, the Caribbean Agricultural Research and Development Institute and the Ministry of Health.

Speaking specifically on ensuring coconut water quality, Mr. Bourne explained that coconut vendors were viewed as food handlers, since the water was “classified as food under the health services regulations”. It was on this basis, he said, that authorities aimed to educate all coconut vendors on best practices.

“Seeing that we’re dealing with food, the element of cross-contamination is very crucial and as a result of that, you want vendors to operate in such a way to reduce risk,” Mr. Bourne emphasised.

He also sought to dispel any notion that the introduction of guidelines would threaten the livelihoods of coconut vendors stating: “A person should be able to feed their families, or whatever the case may be, through coconut vending. It’s not too farfetched and it can happen, but all we want is for people to operate within the law…and we’re here to facilitate the process. We set up programmes, workshops, whatever is needed.”

His sentiments were echoed by Colin Maynard of the Ministry of Agriculture and a member of the National Coconut Stakeholder Platform, who urged vendors to apply the knowledge gained to their daily operations. Mr. Maynard also urged them to encourage their colleagues to participate in upcoming sessions.

Following the culmination of the training, vendors were presented with certificates of achievement and starter kits, inclusive of plastic aprons, hairnets and 16-gallon buckets with a tap which would allow them to have a portable water supply for handwashing.

The second workshop will be held over three half-day sessions on May 14, 16 and 22, at the Ministry of Agriculture, Graeme Hall, Christ Church.