Work On Wildey Gym On Track 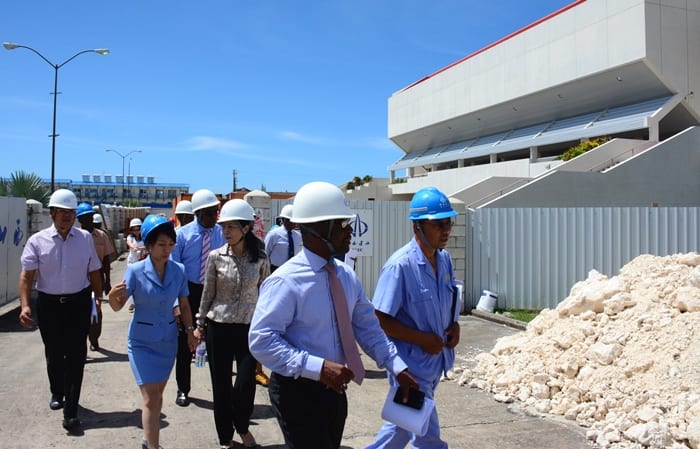 Minister of Sports, Stephen Lashley, and officials, including China’s Ambassador to Barbados Wang Ke, on a tour of the Wildey Gymnasium. (C.Pitt/BGIS)

Come July 2017, Barbadians can look forward to having a newly-renovated Wildey Gymnasium.

This projection came today from Minister with responsibility for Sports, Stephen Lashley, who spoke to members of the media following a tour of the Gymnasium at the Garfield Sobers Sports Complex.

Mr. Lashley noted that in spite of some delays, the construction team from the People’s Republic of China was “able to recover the time” while working on the sporting facility.

The Sports Minister identified delays in the clearance of some of the containers that would have arrived from China at the Bridgetown Port as one of the main challenges experienced during the initial stages of the project.

“That would have given us a setback in relation to the start up, but we worked very hard with the relevant agencies, the Port [and] the Ministry of Finance, to get those areas cleared,” he pointed out.

Additionally, Mr. Lashley revealed that while the Gymnasium itself was scheduled for completion in July of this year, plans for further upgrading, such as the installation of the photovoltaic systems, would be “acted upon later in the year”.

“We would have had to make some changes in the allocation of land for the siting of the panels…we had to make that change and that would have caused us to delay that aspect of the works,” he explained.

The Minister also praised the efforts of the construction team from China, and said he was “quite pleased” with the progress of the project.

Future patrons of the Gymnasium can look forward to newly-installed air conditioning units, aluminum ceilings, and acoustic walls; an overall renovation and cleaning of the external wall; and the installation of several low voltage electrical systems.