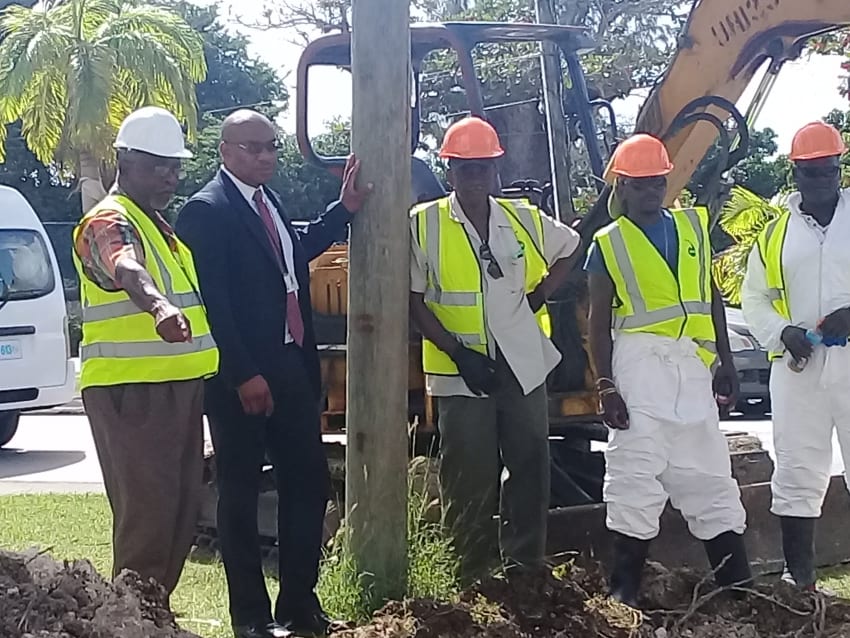 General Manager of the Barbados Water Authority, Keithroy Halliday (second from left) and employees of the BWA at the work site just outside the old Government Information Service building on Bay Street. (N.Phillips/BGIS)

The dye-testing conducted this week by the Barbados Water Authority’s (BWA) Waste Water Division and consultants from Trinidad and Tobago has confirmed a breach in the south coast sewage network.

General Manager of the BWA, Keithroy Halliday gave this update yesterday, prior to receiving two excavators from Innotech Equipment Incorporated.

The tests were conducted on December 12 and 13, in Hastings and Worthing, Christ Church. Dyes were injected into the system to identify the problem areas, in preparation for the installation of a sewer bypass, which would temporarily divert the flow of sewage, allowing officials to get a clearer view and fix the compromised pipe(s).

Mr. Halliday revealed that the test conducted on Wednesday night, using a fluorescent green dye, showed conclusive evidence of a breach in the network, as was determined by the BWA’s initial investigations.

“We injected dye into the effluent chamber, which is the sewage which is coming out after being treated, and after five minutes we saw that it appeared on the entrance side in the [Graeme Hall] Bird Sanctuary area. So the exact area that we identified that they seemed to be a possible breach, we were able to confirm through a simple test that was indeed the case,” he explained.

Mr. Halliday added that further testing was to be done to see if the problem extended beyond that area.

The General Manager further stated that once completed, the next step would be the installation of the sewage bypass and rectifying the breach, but he was unable to give a timeline as to when the work would be completed, citing a number of factors, including the aged network and the amount of water at the site.

“We’ve gone down five feet and we’re already into water so we have to take off the water and continue to excavate and we need to get down probably about 12 feet or so to make that connection. So these are the limiting factors,” he stated.

However, he reiterated that effective communication was key and assured the public that it would be updated as necessary.