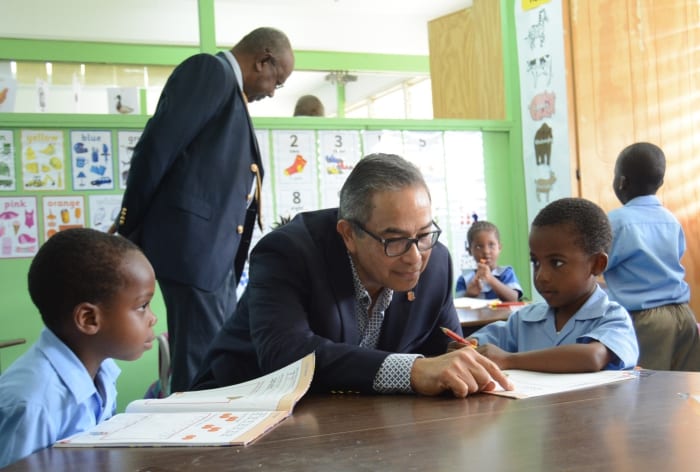 Rotary District Governor, Waddy Sowma, chatting with some of the pupils whose classrooms were refurbished by the Rotary Club of Barbados South. (GP)

President of Rotary Club South, Hiranand Thani, and visiting District Governor of Rotary 7030, Waddy Sowma, toured the rooms, which were repainted and re-tiled with products donated by Marshall Trading Limited.

The project, which had an approximate cost of BDS$40,000, started in August this year, and took about three weeks to complete.

Mr. Thani said the classrooms were in a “bad state” before the refurbishment, and one of the concerns was the amount of dust that pupils had to endure on a daily basis.

He took up the presidency in June this year, and decided to make Arthur Smith Primary a special project of the Rotary Club of Barbados South, after hearing about the needs of the school from the surrounding community.

Principal, Jennifer Hoyte, espoused the work of the Rotary Club of Barbados South. “Their motto is: ‘Service Before Self’… and I want to say ‘thank you’ to Rotary South for their efforts in helping us to make the environment of our children a better one for learning in the classroom,” Ms. Hoyte said.

Mr. Sowma explained that while this was his first time touring a project here in Barbados, he was pleased with the work that was done at the school, and the work of Rotary South on a whole.

“This year is about making a difference, and this project is making a difference in the lives of these children.  We are also focusing on education and having a project like this, which develops education, is close to my heart,” the District Governor stated.

He said Rotary District 7030, which covers the Southern Caribbean, including Antigua and Barbuda and Dominica, would also be looking to help those countries which were hit by Hurricanes Irma and Maria rebuild their infrastructure.

Mr. Sowma disclosed that representatives from his district would be visiting Dominica next year to see how best they could offer assistance there.