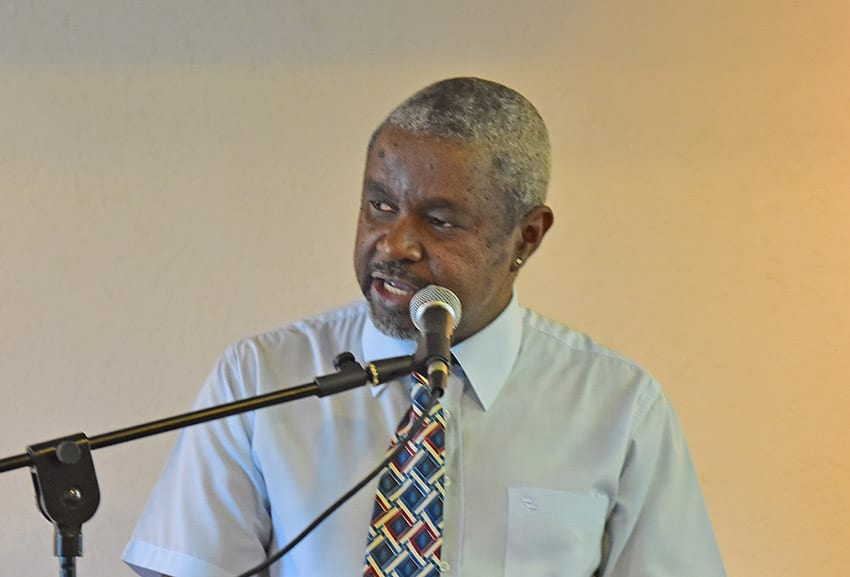 Acting Chief Medical Officer, Dr. Kenneth George, noted that “front packaging labelling” was an added tool that leads to an awareness of the causes of chronic non-communicable diseases since it would highlight information on sugar, salt, fat and saturated fat. (FP)

The upgrading of the CARICOM Regional Standard – Specification for the Labelling of Pre-packaged Foods (CRS 5), and by extension the national equivalent BNS 5 Part 2, has been welcomed by Acting Chief Medical Officer (CMO), Dr. Kenneth George.

Acknowledging that the Health Ministry was pleased with the recent national consultation convened this month by the Barbados National Standards Institution (BNSI), Dr. George said it was long in coming, and the Ministry fully endorsed it.

“Barbadians are much more engaged consumers.  We, in the Ministry of Health, like to protect the consumers while also making sure there is a platform for good economic trade in Barbados, whether the foods are imported or local.  This is coming of age for Barbados where we have graduated to a new way of thinking,” he stressed.

Agreeing with the new concept of front of package labelling, that is being proposed, the CMO said when shopping in supermarkets persons could quickly make an assessment of the components of food as the label would provide information for action.

“We are not saying don’t buy the food, but we are allowing persons to understand what are the contents of the pre-packaged food,” he pointed out.  Dr. George also stressed that it was an added tool that would lead to an awareness of the causes of chronic non-communicable diseases, since it would highlight information on sugar, salt, fat and saturated fat.

“You know that saturated fats are associated with increased risk for cardiovascular disease….  Hypertension is directly related to salt intake.  So, it is just moving Barbados on a good way forward, and we would hope in the Ministry that the manufacturers and distributors would come on board with this.  It is not about alienating; it is about being very progressive and getting to a place where several countries have gone to,” he stated.

Recalling that Barbados had already adopted a standard for tobacco, which later saw the creation of appropriate legislation to fit the Barbadian context, the Acting CMO concluded: “So, this is yet another example where the Caribbean is leading the process and several countries in the Caribbean are supporting this idea that we have standards across the region.”