As authorities continue to battle the challenge of sewage spills on the south coast, environmental health officers are blanketing the affected area to ensure that public health is protected.

Officers attached to the Environmental Health Department of the Ministry of Health are canvassing from Top Rock to Hastings, Christ Church, on a daily basis addressing issues related to vector control and sanitation.

He advised food establishments in the area to be especially vigilant where pests were concerned, particularly roaches, flies and rodents.

“Given the situation that we are in, it is possible for an employee or a patron to come into your premises after having stepped into sewage water, so then your floors are dirty. An insect or other pest will then run through that and on to your preparation surfaces.”

The Deputy Chief Environmental Officer identified three main steps which needed to be followed to get rid of rodents – “build them out, starve them out and kill them out”. 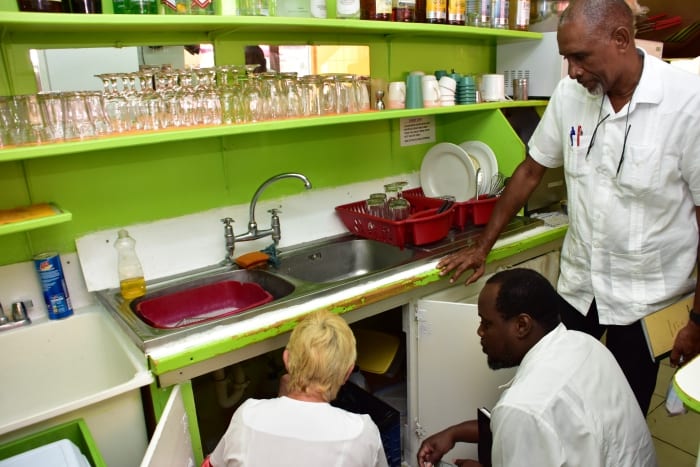 He explained that “to build them out” basically meant that buildings should be constructed or retrofitted in such a way as to prevent access; and “to starve them out” required that their access to food be restricted by ensuring that areas were properly cleaned and there were no bits of food left lying around. “Kill them out” referred to the setting of glue boards, snap traps or poisons, whichever was more applicable to the particular environment.

He also stressed the importance of cleaning and sanitising work spaces in the morning before work began and at night when the business day ended.

“Cleaning for us in environmental health, basically means the removal of physical dirt, that is, dirt you can actually see. Sanitisation has to do with the destruction of bacteria or germs to a level where they will not be able to cause disease.”

Mr. Chapman emphasised that sanitisers needed to be of the correct concentration and left in contact with the surface areas for a minimum of two minutes in order to be effective.

He recommended sanitising with non-scented chlorine bleach because “it is effective, relatively cheap and accessible”.

The concentration which should be used for structural and contact surfaces such as door knobs, telephones and counter tops, as well as plates and cutlery, is one tablespoon of chlorine bleach to one gallon of water, the health professional advised.

“However, if you have sewage water running on your front steps or around your building and your employees or patrons are stepping into it and entering your premises, then we would want you to sanitise using what we call a 1 in 10 chlorine bleach solution.” 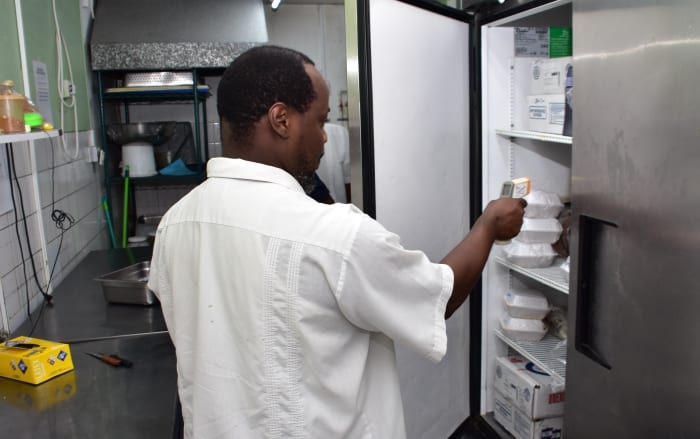 Mr. Chapman disclosed that when using chlorine bleach solution, there was no need to rinse afterwards. Surfaces and equipment should be left to air dry, he instructed.

He also addressed issues related to the proliferation of culex mosquitoes in the affected area. This problem, he said, originated on the periphery of the Graeme Hall Swamp, where some of the sewage water had settled and, as a result, changed the nature of the swamp water in that particular area.

“That water has now become dirty and as a result allows for culex mosquitoes to grow.”

This mosquito, he explained, was not a vector in Barbados since none of the diseases associated with it existed here. “However, it is a pest and it causes a bit of discomfort, especially at night when you are out in the open.”

He advised that persons protect themselves by wearing long-sleeved clothing and covering exposed skin with a repellant containing DEET. For small children, he recommended that citronella oil be used instead of repellant.

“A couple of drops of citronella oil can be mixed with normal hand lotion and applied to the child’s skin. This will give 45 minutes to one hour of protection, after which you have to reapply,” Mr. Chapman stated.

The Department continues to address the mosquito proliferation by treating the areas of stagnant water where the mosquito is breeding, as well as conducting fogging exercises to reduce the adult population.