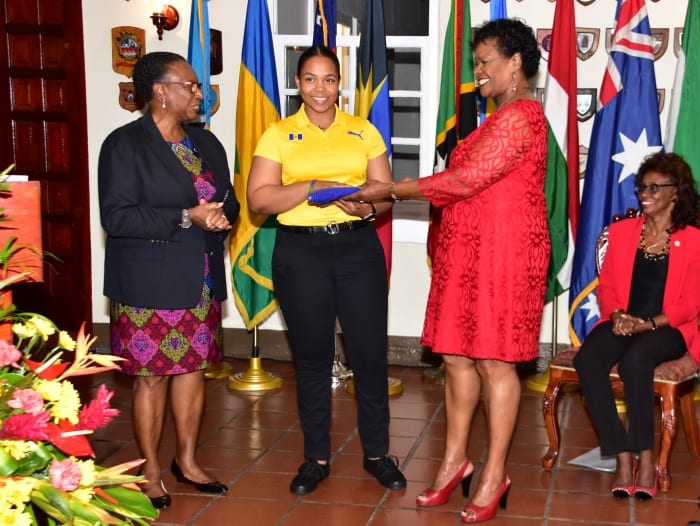 Governor General Dame Sandra Mason presenting Barbados Olympic Association (BOA) Junior Sports Athlete of the year, Meagan Best, with the flag she will carry during the parade of teams at the 2018 Commonwealth Games in Australia in April. (C.Pitt/BGIS)

The Cabinet of Barbados has approved an initiative for the implementation of a Health Evaluation and Health Maintenance Programme for selected elite and emerging athletes.

Sports Minister, Stephen Lashley, made this announcement at the Flag Presentation Ceremony to the team representing Barbados in the 2018 Commonwealth Games, at the Barbados Defence Force Headquarters, St. Ann’s Fort, Garrison, St. Michael.

Mr. Lashley told the gathering that the programme was backed by Cabinet as there was an appreciation for the importance of a health and medical support mechanism for athletes.

He explained that it would be achieved through collaboration between the Ministry of Culture, Sports and Youth, the Barbados Olympic Association and the Barbados Sports Medicine Association.

“When coupled with the insurance coverage that was recently instituted by the Barbados Olympic Association…it is envisaged that these initiatives will contribute significantly to facilitating our athletes’ development. Given these support mechanisms and given our current trajectory, it is anticipated that Barbados will see the development of an enhanced cadre of athletes,” the Sports Minister anticipated.

Mr. Lashley noted that such athletic development in Barbados could “redound to the elevation of Barbados in the global arena” as a sporting nation and premier destination for sports. He pledged Government’s continued support of the efforts of the Barbados Olympic Association, and promised to work closer with all stakeholders towards advancing the nation’s sports.

The Minister said that Government was still focused on the development of all athletes and acknowledged the need for better facilities for play and practice.

“We are aware of the importance of having access to adequate facilities and we are continuing our efforts to enhance our existing facilities. We have completed the refurbishment of the Gymnasium Complex, and this facility will continue to be augmented by the Bond at Kensington Oval, for our indoor sports activities.  We know that a redeveloped National Stadium has been some time in coming but I assure you that we are working assiduously towards making that a reality,” Mr. Lashley promised.

This year, Barbados Olympic Association Junior Sports Athlete of the Year, Meagan Best, will be the flag bearer for Barbados at the 2018 Commonwealth Games, which take place in April in Australia.

During the ceremony, Governor General Dame Sandra Mason presented Ms. Best with the flag she will hold during the parade of teams at the Commonwealth Games.