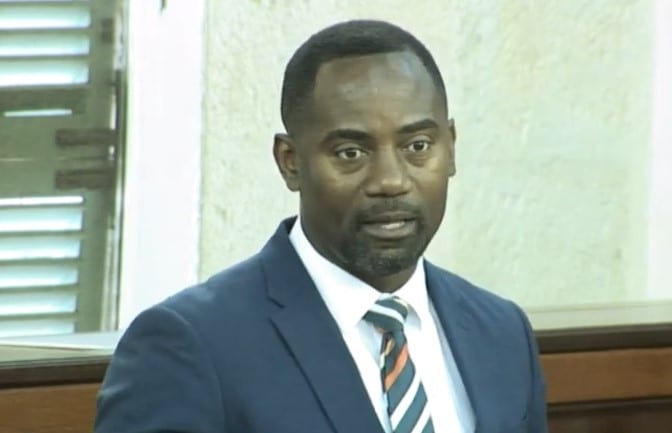 Minister of Maritime Affairs and the Blue Economy, Kirk Humphrey, speaking during the second reading of the Control of Disposable Plastics Bill 2019 in the House of Assembly on Monday. (Barbados Parliament)

As government prepares to implement a ban on petroleum-based plastics, importers, retailers and users have been warned that they will face serious consequences, if they breach the new law.

After those dates, government is proposing to enforce penalties ranging as high as $50,000, or a year’s imprisonment, or both, for importing, offering for sale, or using single-use plastics in Barbados.

This was announced by Minister of Maritime Affairs and the Blue Economy, Kirk Humphrey, during the second reading of the Control of Disposable Plastics Bill 2019, in the House of Assembly on Monday.

Mr. Humphrey explained that single-use plastic containers referred to those made using plastic or polystyrene, and included cups, food containers, and egg trays used in the culinary retail industry.

He said that under the Bill it was proposed that anyone who imports, offers for sale, sells or uses single-use plastic or cutlery after the deadline had passed would be guilty of an offence, and would be liable on summary conviction to a fine of $50,000, a year’s imprisonment, or both. And, anyone continuing the practice, can be fined $1,000 for each day or part thereof, during which the offence continues.

“That licence is $25 per year.  This is to ensure that importers bring in the kind of products that are in compliance with what Barbados is seeking to achieve,” Mr. Humphrey said, noting that importers would also be subjected to the same fines if they are caught breaching the proposed Act.

During his presentation, Mr. Humphrey explained that the Barbados National Standards Institution was asked to govern the importation of single-use plastics and ensure that importers did not try to “trick the system”.

He noted that government was working on putting a committee in place comprising “people who are passionate about the environment”.  That, he said, would include non-governmental organizations, and members of the public service.

“It has to be a committee which looks at a lot of these issues to address, monitor, develop and implement plastic pollution programmes, and formulate and implement policies and programmes to educate the public on the pollution created by plastic,” he stated.