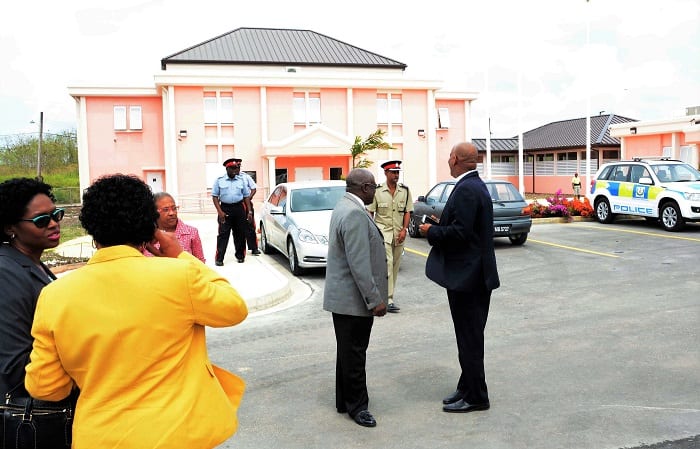 Attorney General and Minister of Legal Affairs, Dale Marshall in discussion with Chief Justice, Sir Marston Gibson while on tour of the new complex at Cane Garden, St. Thomas on Friday. Also pictured is Registrar of the Supreme Court, Barbara Cooke-Alleyne (left). (C.Pitt/BGIS)

Persons waiting to have their criminal matters heard by the High Court will have their day in court from Monday, June 25.

That’s when the High Court will resume hearing criminal cases from the new District “D” Police Station at Cane Garden, St. Thomas complex. Criminal Courts No. 1 & 2, the Juvenile Court, the Coroner’s Court and its office and the Master of the Supreme Court, will all operate from that location.

Attorney General and Minister of Legal Affairs, Dale Marshall, toured the facility on Friday and said that the new arrangement was expected to remain in place until year-end. “As of next week, we will have our Criminal Court in the High Court jurisdiction up and running along with the Master [of the High Court],” he said.

Meanwhile, persons waiting to have a resolution in their civil matters will have a slightly longer wait, as work is set to begin on the temporary location at Manor Lodge, Green Hill, St. Michael, next week and run until mid-July.

The Attorney General acknowledged that it would be difficult for some litigants, judges and individuals to access the Cane Garden, St. Thomas facility, but stressed that better could not be done at this time.

“It is vital that we consider the liberty of the subjects. It was more important for us from the point of view of human rights and constitutional rights that we get the criminal process back up and running immediately,” he stated.

Mr. Marshall explained that Government had to invest in additional technology for the St. Thomas location to allow bail application to continue being heard remotely, as equipment installed at the White Park Road, St. Michael complex could not be “conveniently moved”.

Chief Justice, Sir Marston Gibson; Registrar of the Supreme Court, Barbara Cooke-Alleyne; Deputy Director of Public Prosecutions, Anthony Blackman; President of the Bar Association, Liesel Weekes; and other officials were present for the tour of the new court venue.