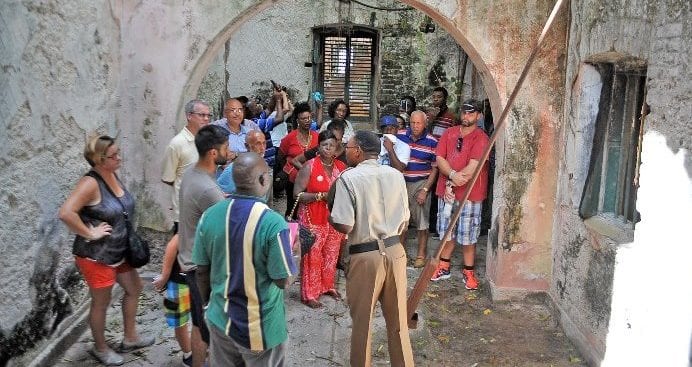 A group touring the 161-year-old Glendairy Prison on Saturday. (A.Miller/BGIS)

The sturdy walls of Her Majesty Prison (HMP) Glendairy have withstood earthquakes, hurricanes, and other events impacting the island, and even a fire in 2005 was not enough to destroy them.

While delivering the feature address at the Decommissioning Ceremony and Gala of the prison last Saturday, Minister of Home Affairs, Adriel Brathwaite, surmised that if its walls could talk, they would tell quite a story.

He noted that whenever the story was written, it would be a story of Barbados, reflecting the island’s triumph and the spirit of Barbadians.

“There is a lot of history within these walls and it is my hope, my pledge, that once I can play a part, I will ensure that the history of this institution will be written because of its importance to our landscape,” he affirmed.

HMP Glendairy Prisons was originally built in 1855 to house 72 prisoners, but was later expanded to accommodate an increasing number of inmates. Less than 10 per cent of the building was damaged by fire in 2005; those areas being the Male Block, a section of the female prison, the kitchen, bakery and mess hall and a small portion of staff quarters.

Already there are bids by the Barbados National Trust to tell the story of the prison. In fact, the Minister disclosed that Senator Professor Henry Fraser wrote to Government 18 months ago about a proposal to transform the institution into a prison museum.

He noted that he had also received requests from interested parties to use the decommissioned prison as a venue for Crop Over events and to develop the film industry.

And while no concrete decisions have been made as to the future use of   HMP Glendairy, Mr. Brathwaite stated that he would do all in his power to ensure that it was put to the best possible use for the people of Barbados.

He also made it clear that the decommissioning of HMP Glendairy Prisons would not be the end of the history behind its great walls.

Superintendent of Prisons, Lieutenant Colonel John Nurse, also noted that the Station Hill, St. Michael facility contributed “in no small measure to the fabric of the Barbadian society, whether it was through the interaction of the prisoners or staff in the community, or through the creation of substance of folklore which many of us still today discuss or speak about”.

He added that the gala provided an opportunity for the prison service to close a chapter and share a little history of the institution, which sits on 14 acres of land.

For him, while the exploits of Glendairy may pale in comparison to international prisons such as Alcatraz and Rikers in the United States, and the Tower of London, the stories emanating from within the walls will remain cherished discussion topics for generations to come. 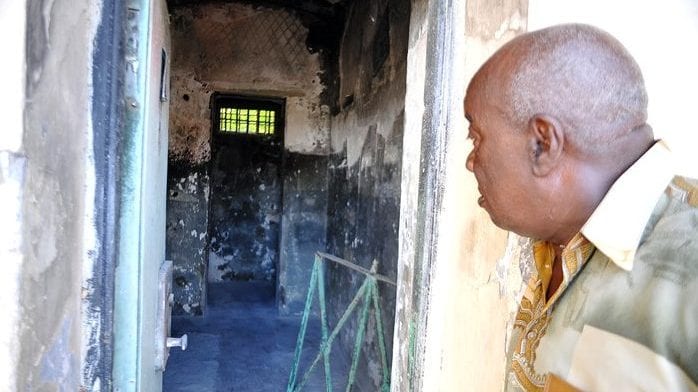 This visitor peering in to one of the cells at Glendairy Prison. (A.Miller/BGIS)

The evening of nostalgia brought the curtain down on an open day at the penal institution, which saw thousands of visitors journeying inside the prison’s walls. Prison Officers who took the eager patrons on guided tours of the mess hall, the famous prison baker’s shop; the tailor shop and many of the cells, including maximum security.

Many marveled at the size of the cells and the lack of light at the facility, while others opted to observe the architectural structure of the building which has stood the test of time for the last 161 years.

No tour of HMP Glendairy would have been complete without touring the day and night cells which Barbados’ most notorious criminal, Winston Hall, occupied before his last escape.

Described by prison officers as a “fleet footed man”, not even the most stringent of measures were able to confine the infamous criminal who escaped yet again and remained on the run until he died at the end of a policeman’s gun.

The gallows were also a “must see” for the touring parties, who listened intently as the tour guides recounted how prisoners were restrained before being hanged.

The future of HMP Glendairy will no doubt be a positive one as it enters a new phase of its existence.  But as its visitors depart and silence descends once again on this magnificent structure, its secrets will remain locked behind its walls.