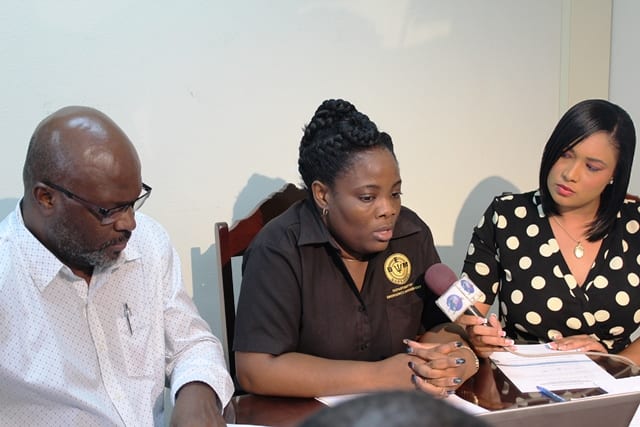 Attorney General and Minister of Home Affairs, Adriel Brathwaite and Director of the Department of Emergency Management (DEM), Kerry Hinds being interviewed by the Caribbean Broadcasting Corporation’s Lisa Lorde during a press briefing on Tropical Storm Matthew today. (A.Skeete/BGIS)

Businesses across Barbados are being reminded that they should observe national shutdown protocols.

This reminder is coming from Minister of Home Affairs, Adriel Brathwaite, who took issue with some business houses opening their doors today as Barbados remains under a tropical storm warning for the passage of Tropical Storm Matthew.

Speaking during a media briefing at the Department of Emergency Management (DEM) today, Mr. Brathwaite said he received reports of a fast food outlet and a supermarket chain being open to business, at a time when the island’s air and seaports remained closed, along with schools.

“Whilst we understand the importance of business and what they are trying to do, the reality is… it is dangerous out there, and I think it is irresponsible of these institutions, if what I am hearing is correct, to be open at this point in time when we are asking persons to stay indoors because of how dangerous the surroundings are,” he stated.

He made it clear that if there was a national shutdown, then businesses across the island were expected to comply.

Meanwhile, Mr. Brathwaite, who is also Attorney General, encouraged residents to heed the warnings of officials at the DEM and remain indoors. The Minister indicated that there were protocols to be followed for a national shutdown before one is issued.

“There is a national committee which looks at the information available and then make the best judgment available at the time,” he explained.

He stressed that even though there was a national shutdown, contingencies were in place for sectors such as tourism to ensure that there was continuity during the event, while making all necessary accommodations for staff.