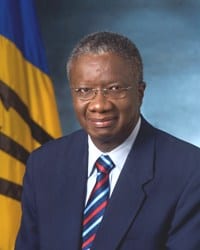 While still a teacher, he registered as a part-time student at the Cave Hill Campus of the University of the West Indies in 1971. He graduated in 1975 with the Bachelor of Arts degree with honours in Political Science and History.

Between 1982 and 1984 he also read for the Legal Education Certificate at the Hugh Wooding Law School, and was admitted to the Bar of Barbados in 1984. He practised as a defense lawyer from 1984 until January, 2008.

The Rt. Hon. Freundel J. Stuart, Q.C., M.P., has for several years been a member of the Democratic Labour Party, serving that party in several capacities, including that of President; of Member of Parliament for the Constituency of St. Philip South during the period 1994 – 1999; and of Senator during the period 2003 – 2007.

He became a Member of Parliament for the Constituency of St. Michael South in January 2008 and was elevated to the status and dignity of Queens Counsel in September, 2008. He served as Deputy Prime Minister, Attorney General and Minister of Home Affairs until his appointment as the seventh Prime Minister of Barbados on 23rd October, 2010.

On February 21, 2013 he led the Democratic Labour Party to success at the general elections held on that date and commenced his second term as Prime Minister.

On January 24, 2014, Her Majesty Queen Elizabeth II elevated him to the membership of Her Majesty’s Most Honourable Privy Council entitling him to use the title “Right Honourable”.

On May 26, 2016, for his dedication and commitment to the Caribbean Community, and for his unflinching support for the rights of Small Island Developing States, the Order of Roraima of the Cooperative Republic of Guyana, the highest honour which that country can confer on a foreign national, was bestowed on him by the President, His Excellency Brigadier David Granger, at an investiture held at State House, Guyana.

On March 8, 2017, the Governing Body of Keble College, Oxford University, in the United Kingdom, elected Mr. Stuart as one of its Honorary Fellows.

His interests are reading and listening to music. Mr. Stuart is single and is the father of one daughter.