Housing Team Off To Habitat III 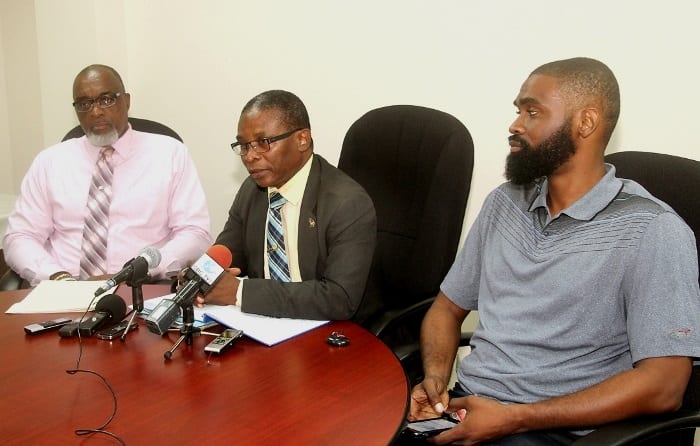 Barbados is doing well with its housing programme and the expansion of its urban areas.

Minister of Housing, Lands and Rural Development, Denis Kellman, made this disclosure today at a press conference at his Country Road, St. Michael headquarters, as a delegation prepares to attend the Third United Nations (UN) Conference on Housing and Sustainable Urban Development in Quito, Ecuador, from October 17 to 20.

Stating that “we have to stop seeing problems and start recognising we have challenges and deal with the challenges…and solving the problems”, the Minister outlined some of the agenda items which the housing team would address at the Quito Conference, also known as Habitat III Conference.

He said: “We are speaking about urban resilience and sustainable urban development in small island developing states (SIDs).  We are seeking to make cities and human settlements inclusive, safe, resilient and sustainable. We will be discussing water problems, which is familiar to all of us here in Barbados, agriculture, waste collection, transportation, increased mobility of goods and people and lack of resources.”

The conference is also expected to look at congestion as it relates to transportation, health problem and rapid urbanisation, sea level rise, water shortage and how to deal with water distribution, climate change and deforestation.  Minister Kellman pointed out that although the latter might not be a major problem here, Barbados still needed to plant more trees.

Stating that desalination would feature on the agenda as well, he explained: “The world has accepted that the current fresh water supply cannot be kept at the same level and that we have to move towards desalination, as you would appreciate this is something that we in Barbados have moved forward on.  We have started this process as far back as the 2000s and I remember in 2003 there was a desalination plant set up at the Hope in St. Lucy.  Then we would have had Fresh Water Bay in St. Michael.”

Minister Kellman added that what Barbados was dealing with was not new and the conference agenda was such that the island had to recognise that what we see as a problem, people were seeing as a challenge.

He admitted: “I personally see them as challenges and I have always sought to find solutions to them.  One of the things that we have to recognize is that in this time that we are not only dealing with housing problems…

Proffering one solution to the housing problem on the island, Mr. Kellman remarked: “One of the things that we might advocate is what used to previously obtain, where people go to school, they learn, they get a job and they remain at home to ensure the family home is kept in such a state that when they leave home they do not have to worry as to whether the  house at home is good or not because they would have done enough to the family income to ensure that the family home is a proper home.”

He pointed out that since this was no longer occurring as it used to and with people now demanding more housing solutions, this was stretching the resources and creating greater social costs for the country.

He added that his Ministry might also examine the situation where large homes on the island are occupied by only two people and determine how the inhabitants could be encouraged to look at the possibility of creating revenue for themselves, “while accommodating other persons”.

The Housing Minister will lead the delegation, which leaves the island this Saturday, October 15. It includes the UN Habitat Focal Point for Barbados/Senior Housing Planner in the Ministry, Kelly Hunte, and the two Co-chairs of Habitat III Committee, Chief Town Planner, Mark Cummins, and Economist, Jeremy Stephen.