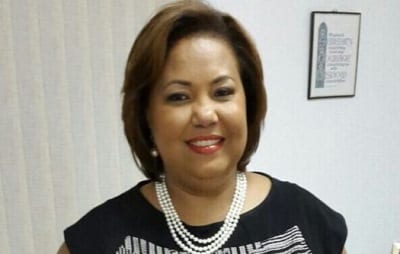 Attorney-at-law Ella Hoyos is the new Honorary Consul of Jamaica in Barbados.

Ms. Hoyos, who is the Principal of the Rockley Law Group, a commercial law firm, received the Exequatur authorising her appointment from Chief of Protocol in the Ministry of Foreign Affairs, Philip St. Hill last Friday.

The ceremony was witnessed by Dean of the Diplomatic Corps, Selwyn Smith; and Foreign Service Officers, Patti-Ann Gibson and Corey Archer.

Mr. St. Hill, in welcoming the new Honorary Consul, noted that prior to her appointment, the Jamaican High Commission in Trinidad was the first point of contact for people in Barbados. With her appointment, he said, Jamaica will now be very well represented here, and he looked forward to a very productive relationship between the Honorary Consul and the Protocol Division.

In response, Ms. Hoyos said that having lived in Barbados for 27 years, she had established deep roots and strong relationships at all levels of society. She said she looked forward to developing and advancing relationships between Jamaica and Barbados.

As a regionalist, she said her focus was to promote similarities rather than differences, and to foster a relationship which emphasised the importance of “working together on the things that matter most to our people”.