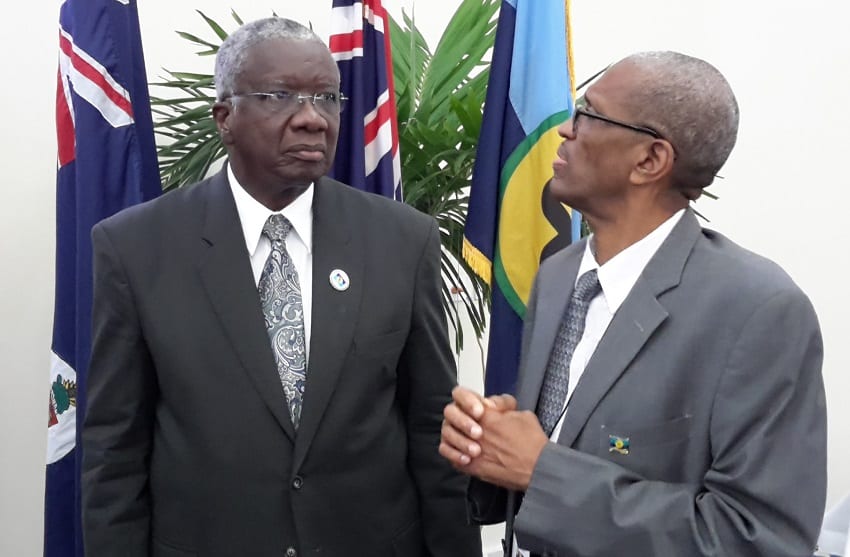 Prime Minister Freundel Stuart (left) listens to a point being made by Assistant Secretary General, Directorate for Human and Social Development, Dr. Douglas Slater, on the margins of the CARICOM Summit. (C. Lashley/BGIS)

Caribbean people now have a blueprint for their development, with the adoption of the CARICOM Human Resource Development Strategy 2030.

The strategy was presented by the Prime Minister of St. Kitts and Nevis, Dr. Timothy Harris, at the just concluded Thirty-Eighth Regular Meeting of the Heads of Government of the Caribbean Community in Grenada.

It covers a wide range of issues and mandates the creation of the prioritisation of a globally competitive, innovative and seamlessly integrated education system to drive inclusive sustainable development in the region.

While describing the benefits of the plan to the media, Prime Minister Freundel Stuart noted that Barbados was a very good example of the dividends that may be reaped when a country invests in its human resources.

Mr. Stuart pointed out that the island would have to adapt the Strategy to meet its needs, as would other CARICOM Member States, because the human resource needs in one territory may be dissimilar to those in another territory.

He mentioned that while Guyana had bauxite, forestry and gold, and would soon have large reservoirs of oil; Jamaica possessed bauxite; and Trinidad and Tobago, oil, Barbados has had to rely on its human capital, investing significantly in education, health, and other spheres, which has yielded dividends for the country.

The Prime Minister continued: “This is not a boast. There is no country in the English-speaking Caribbean, not one, that has invested as substantially as has Barbados in its human resource capital, and that is why Barbados has done as well as it has done over the last 50 years of Independence and even before.”

“We want balanced development in this region and recognise that as the world changes, we have to adapt the deployment of our human resources in such a way to maximise the returns we can get from those human resources.”

The Human Resource Development Strategy 2030 is an essential part of the CARICOM Strategic Plan. It examines education in a holistic manner to embrace early childhood, tertiary education and workplace learning for the development of knowledge, skills and competencies “in the pursuit of regional workforce development and better citizenship”.

It will be facilitated by a CARICOM Commission on Human Resource Development, and will mobilise Members States, Associate Members, regional institutions, international development partners, the private sector and other interests.