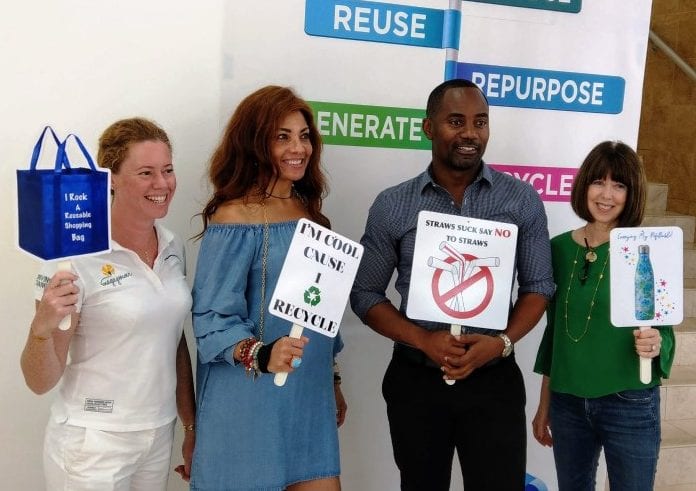 Minister of Maritime Affairs and the Blue Economy, Kirk Humphrey, at the ministry’s “No Plastics, No Problem” initiative which was held at Sheraton Mall. (A. Reid/BGIS)

There are alternatives to petro-based single-use plastics available in Barbados, and they are affordable.

That was the declaration of Minister of Maritime Affairs and the Blue Economy, Kirk Humphrey, following a tour of a number of exhibits at Sheraton Mall.  It was part of the ministry’s “No Plastics, No Problem” initiative last Saturday, ahead of the April 1 ban on the importation of the products.

“We have to make a real comparison to weigh the true cost.  The cost is not necessarily between the cost of a polystyrene cup and the cost of a biodegradable cup, but the cost really is the cost to clean-up Barbados; protect our coral; save our fish and save our own health; because at the end of the day, it has been found that there are a lot of micro plastics in the things that we consume.  Those are the real costs,” he stated.

Mr. Humphrey added that when compared, the unit costs of the alternatives were not exorbitant, especially when weighed against the true costs of trying to protect this island’s resources.

The minister noted that there were a number of businesses and non-governmental organizations which had clearly demonstrated commitment to making Barbados a healthier place to live and protecting the island’s ecosystems and marine life.

But, he warned, the ban on single-use plastics should not be seen as an excuse to throw garbage through car windows because the alternative products will return to their natural state when disposed. 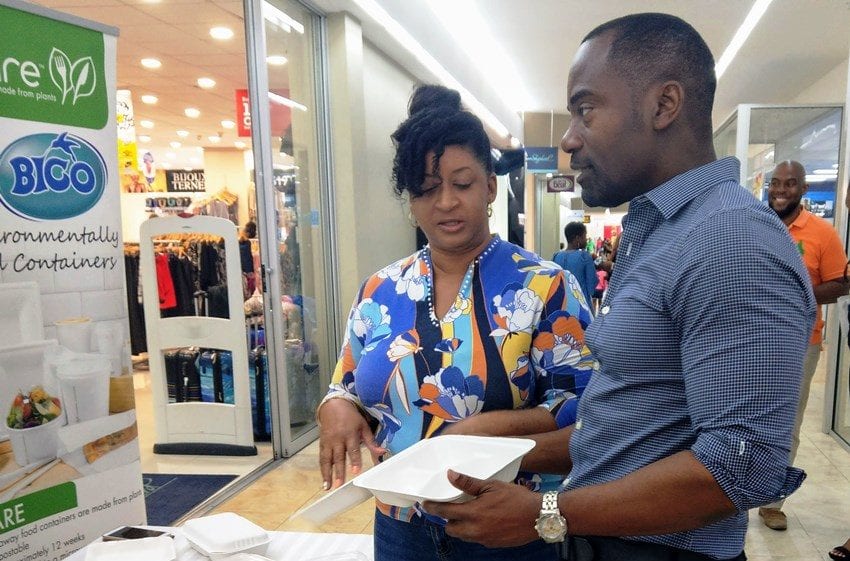 Minister of Maritime Affairs and the Blue Economy, Kirk Humphrey, stated that when compared, the unit costs of the alternatives to petro-based single-use plastics were not exorbitant. (A. Reid/BGIS)

“I need to address the idea that because we are now importing biodegradable products that people could just litter indiscriminately across Barbados; that it is ok to throw a plastic bag out through your car window, or it is ok to take your Styrofoam or polystyrene plate and just throw it out. That is not right.

“Even though we are trying to save the environment so that those things biodegrade, we want people to change their behavior as well,” he stated.

Mr. Humphrey said while legislation to govern littering is on its way, he was opposed to the idea of having to impose everything by law, even as both the House of Assembly and the Senate approved the Control of Disposable Plastics Bill 2019, which will see heavy fines being imposed for those who fail to comply.

From today, April 1, the importation of petro-based plastics is banned in Barbados.  This will be followed by a July 1 ban on the retail, use and wholesale of the products. Persons caught importing, selling or using the products after those dates may be fined up to $50,000, or serve one year in prison, or both.

Meanwhile, Director of the Sheraton Mall, Sharon Oran, said the initiative was designed to show persons the alternatives that were available.