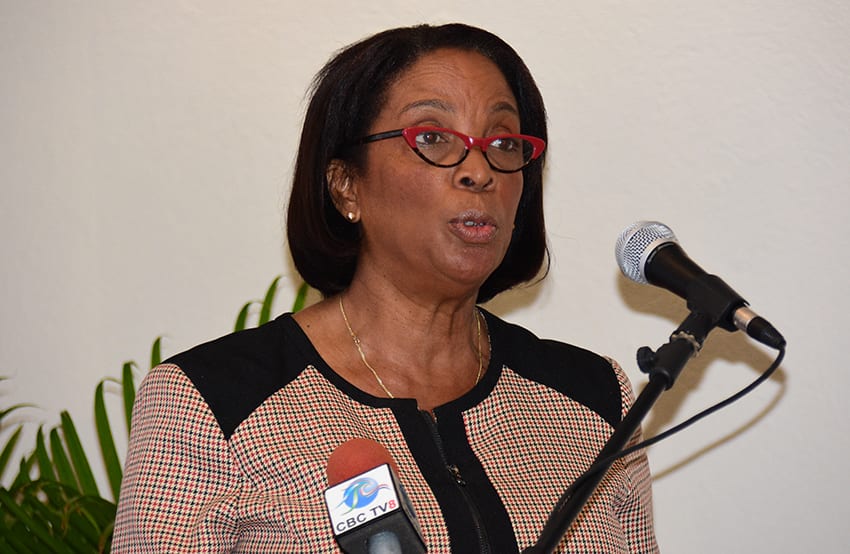 Minister in the Ministry of Foreign Trade, Sandra Husbands addressing the launch of the CARICHAM, a group comprising regional Chambers of Commerce at the Accra Beach Hotel and Spa yesterday. (RM/GP)

The newly formed Network of Caribbean Chambers of Commerce (CARICHAM) has the potential to shape how the CARICOM Single Market and Economy (CSME) will work.

This is according to Minister in the Ministry of Foreign Trade, Sandra Husbands. She was speaking at the launch of CARICHAM, a group comprising regional Chambers of Commerce, at Accra Beach Hotel and Spa on Monday.

“The Network of Chambers of Commerce will act as a most powerful lobby, and as a partner in shaping and improving how the CSME will work.  This is important, not only to engage at your national domestic level, but to engage in impacting on policy at the regional level so that we can make CSME work well, and more importantly, that there is cooperation and collaboration to engage the global environment together.

“By collaborating around the common goal of maximizing our regional space, and hopefully regional joint initiatives, this network can be a powerful transformational tool of Caribbean fortunes.  This is why the move to input domestic policy and regional policy of the CSME is absolutely necessary and desirable,” she said.

The minister explained that foreign trade policy in Barbados was not developed in a vacuum, rather there was communication with private and public sector stakeholders.

She shared that business support organizations (BSOs), such as Barbados Coalition of Services Industries, the Barbados Private Sector Trade Team, the unions, and the Barbados Chamber of Commerce and Industry (BCCI), play a critical role in the development of foreign trade policy, and she emphasized that “at the table, seats are reserved” for them.

“Barbados sees the role of all of these BSOs as important in the formation of its trade policy, given that a wide section of the population will be affected by any policy implemented.  Input from the Chamber on how trade policy is likely to affect players is always factored into our decisions.  In so doing, any negative impacts of that policy can be analysed, adjusted or discarded,” she stated.

“The BSOs were instrumental in these discussions…  The representatives of the BCCI were able to make input on areas of interest, terms and conditions of trade, transport requirements, trade facilitation and other matters. This input assists in developing a useful and effective approach to our engaging in Suriname, thus increasing the chance of pursuing initiatives which can benefit citizens and enterprises,” she said.

Minister Husbands added that her ministry would be embarking shortly on a similar consultative exercise with Guyana.

During the launch, representatives of each member country participated in the signing and declaration of the CARICHAM.  They are Antigua and Barbuda, Barbados, Belize, Cuba, Dominica, Grenada, Guyana, Haiti, Jamaica, Martinique, Saint Lucia, St. Kitts and Nevis, St. Vincent and the Grenadines, Suriname, and Trinidad and Tobago.