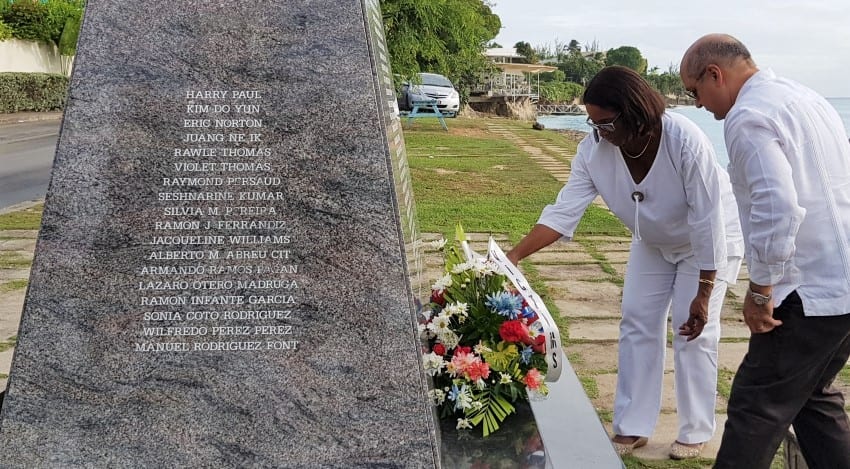 Minister in the Ministry of Foreign Trade, Sandra Husbands and Cuba’s Ambassador to Barbados, Francisco Fernández Peña, laying a wreath at the memorial to commemorate the October 6, 1976 downing of Cubana Airlines Flight 455. (S. Pilé/BGIS)

Minister in the Ministry of Foreign Trade, Sandra Husbands, believes that the “act of terrorism” which occurred in territorial waters off Barbados 42 years ago “is forever etched in our memories”, and commemorating it should continue.

She was speaking during a memorial service to commemorate the October 6, 1976 downing of Cubana Airlines Flight 455, which exploded off the coast of Payne’s Bay, St. James, killing 73 passengers and crew on board.

Extending condolences to the families of the victims who were from the Republic of Cuba, the Co-operative Republic of Guyana and the Democratic People’s Republic of Korea, Minister Husbands said that the annual commemoration was not done out of routine but “out of the obligation we feel to ensure that this heinous act, for which final justice is still pending, remains in our consciousness.”

She stressed that the island’s on-going presence and participation must also serve as a reminder to commit to the “elimination of these types of acts”.

“Even though it appears that the odds are sometimes stacked against us and reaching justice appears to be a mountain too high to climb, let us move on with optimism and hope towards that goal.  As we pursue what is right, what is just and what is good, the future of our children and our world would be one of exemplary conduct, love of humanity and a world where peace, security and mutual respect reign.

“Barbados is happy to join in this worthy quest.  This monument before which we stand and where we have just placed our wreaths is a pointed symbol of that commitment. We also remain committed to partner in global efforts to combat terrorism and other transnational criminal activities,” she emphasised.

[/x_video_embed]The Foreign Trade Minister suggested that if any good came of the tragedy, it was the friendly relations which are manifested in the special bond between the people of Barbados and Cuba.

“Our relations give us the basis to join with each other and with the international community, in general, to embrace our common abhorrence of these evil acts and our determination to end them,” Minister Husbands said.

Honorary Consul of Guyana to Barbados, Cita Pilgrim, also gave remarks at the commemoration.  She noted that 11 Guyanese lost their lives – 10 students travelling to Cuba to pursue higher education and the wife of a Guyanese diplomat who was posted to Havana.

“These young passengers on Cubana 455 had not done a wrong to anyone. Their countries of origin only wanted to live independently in peace and harmony with other countries, but those terrorists had other objectives. Those were to demonstrate that they had the power and intention to destroy the values for which those countries stood and to show that they could attack wherever and whenever they wanted,” Ms. Pilgrim said.

She called for justice to be served.  “The international community must recognize and acknowledge this savage act of terrorism, and in doing so ensure that this hemisphere is free from debilitating terrorism.  It is not too late to right an unforgiveable wrong, which was committed against our people, and to see that justice is done.”