Illegal Guns To Be Taken Off The Streets 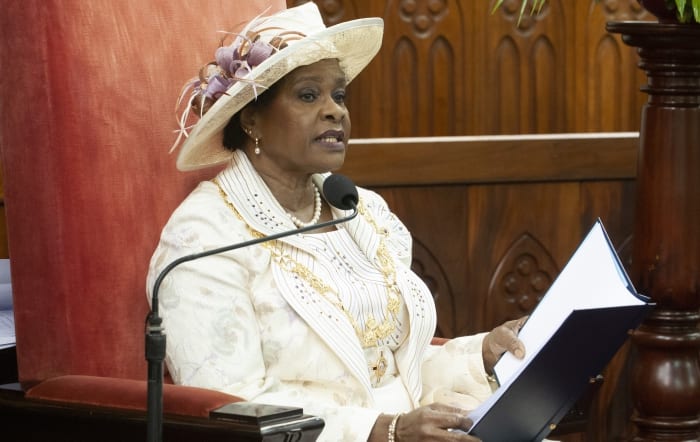 Government is moving to take illegal firearms off the streets.

Word of this came from Governor General, Dame Sandra Mason, on Tuesday, as she delivered the Throne Speech at the State Opening of Parliament, in the Senate Chamber.

Dame Sandra said Government would encourage a close partnership among the Church, community groups and Government agencies responsible for social services to reduce gun violence and support safe communities. “It will offer a six-month gun amnesty and buy-back programme for legal and illegal firearms to reduce their numbers in the hands of civilians and in communities.

“After a period of public education, debate and consultation, my Government will hold a Referendum on the decriminalisation of recreational marijuana; in the interim however, we will follow the science and accept the benefits of medical marijuana in treating a multiplicity of complaints. We will regulate to facilitate its availability to those in need,” she stated.

The Governor General added that Government shared the concern of its citizens about the increased levels of crime and insecurity in Barbados. She expressed confidence that with proactive policing and targeted community outreach policies, the trend could be effectively reversed.

“Once the Supreme Court Building is returned to full operation, my Government will prioritise the appointment of three additional High Court Judges to address the backlog of serious criminal cases and to provide a framework for the prompt delivery of justice.

“My Government will work to boost the morale of the Royal Barbados Police Force by ensuring that the matter of appointments and promotions is managed with transparency, fairness and expedition. We will also free police officers from carrying out non-law enforcement and administrative duties to enable them to better focus on policing, and will encourage greater emphasis on community-based policing,” she noted.

Turning her attention to the stamping out of corruption, Dame Sandra pointed out that Government would have a zero tolerance policy, moving swiftly to fight and punish corruption in whatever quarter it might manifest itself.

“My Government will immediately introduce into this Parliament comprehensive Integrity Legislation which will hold Ministers and Board Chairpersons and Deputy Chairpersons accountable for their actions; require politicians and key public officials to disclose their assets and liabilities; and provide stiff penalties for those who attempt to bribe politicians and public officials,” she declared.

She said legislation would be enacted in several areas and listed some as the Freedom of Information Bill; an updated Procurement Act; the establishment of Special Economic Zones; a Clean Air Act; and regulation to govern the establishment and functioning of People’s Assemblies. In addition, she stated, the Police Act, the Road Traffic Act and the Agricultural Products and Livestock Act would be reviewed.