Improvements To Maritime Sector On The Cards 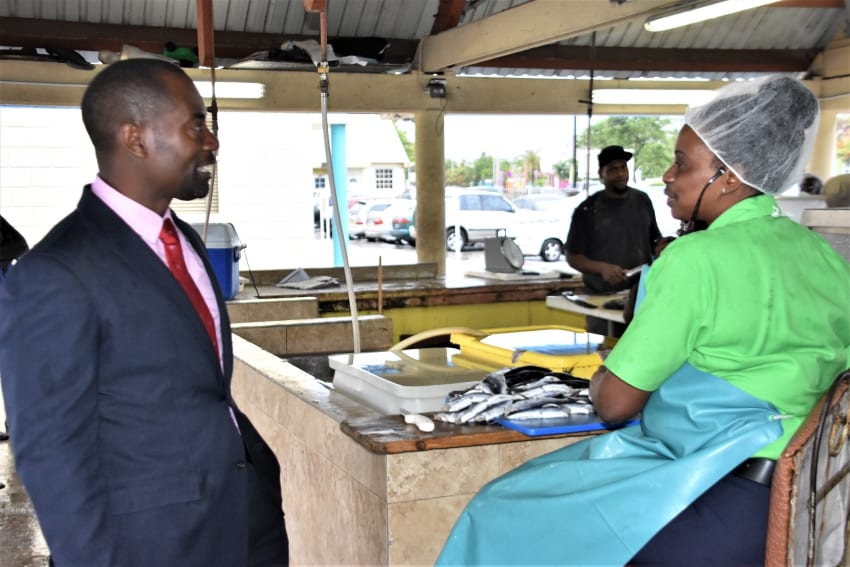 Minister of Maritime Affairs and Blue Economy, Kirk Humphrey, on a recent tour of the Bridgetown Fisheries Complex. (C.Pitt/BGIS)

Changes are coming to Barbados’ maritime sector which would see improvements across the board.

And, if Minister of Maritime Affairs and Blue Economy, Kirk Humphrey, has his way, fishing vessels will be mandated to meet certain international standards before setting sail.

This was among the changes highlighted by the Minister in his first message to mark Day of the Seafarer celebrated on June 25, under the theme: Seafarers’ Wellbeing.

“Working at sea can be a perilous task, especially in these times when weather patterns and, consequently, sea conditions around the globe are so negatively impacted by climate change, and when piracy on the high seas is on the rise,” he stated, while commending fisherfolk for the great sacrifices they made.

Noting that Government was cognisant of the dangers faced by seafarers as it related to going adrift, getting lost or sometimes even perishing at sea, Mr. Humphrey said his Ministry was embarking on programmes, in collaboration with the Barbados Coast Guard and the Regional Security System, to mitigate the risk of perils at sea.

“The Ministry will also work to ensure, even if it has to be made mandatory, that fishing vessels before setting sail, are fitted with the requisite communication equipment that meets international standards, and that they also carry the requisite safety support supplies to support life at sea while awaiting help from onshore,” the Minister stated.

These initiatives, he said, would be facilitated through the use of internationally accepted state-of-the-art land-to-sea communication equipment to enable the Coast Guard to detect vessels experiencing difficulties at sea. He added that Government would also seek to ensure that boat owners were required to carry out on-sea maintenance on their vessels in the event of breakdowns and first aid in the event of a health threat.

In addition, Minister Humphrey noted that Government was committed to the adoption of a programme to allow for the development and upkeep of infrastructure at the Bridgetown Port.

That, he said, would ensure the Port met its optimal international standards, and adopted the highest level of international best practices through the use of state-of-the-art technology in its operations.

“I envisage that by 2023, the Bridgetown Port will become a first choice transshipment point for the transport of cargo to the rest of the Caribbean and one that cruise liners would consider the most preferred port of call as we seek every year to increase the number of cruise liners that visit our shores,” he declared.

He added that his Ministry was established to focus specifically on the development and maintenance of an economic sector in Barbados that would be built on gains that could be capitalised from using resources from the sea.