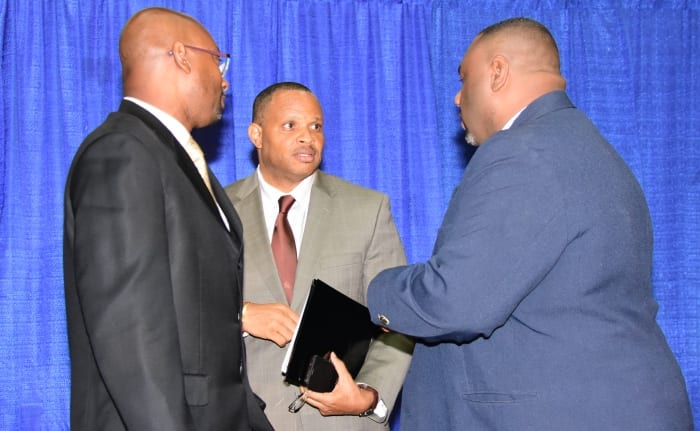 Government remains committed to improving the competitiveness of Barbados over the short, medium and long-term.

This assurance came today from Minister of Finance and Economic Affairs, Christopher Sinckler, as he delivered remarks at the closing workshop for the Barbados Competitiveness Programme, at the Lloyd Erskine Sandiford Centre.

Mr. Sinckler contended that attaining competitiveness was not a one-off achievement but a continuous and dynamic process that had to be coordinated and managed.

He pointed out that achieving competitiveness was not just about a set of institutional arrangements or processes, but encompassed attitude.

“If the attitude of the persons who are charged with the responsibility of managing these institutions and processes determine in their minds that they are going to facilitate and provide the leadership necessary to achieve competitiveness, it will be achieved.

“The converse occurs, if persons do not believe they can provide leadership…to achieve competitiveness, no institutional framework, institutional process or competitiveness programme will help us to achieve that. It is up to us Barbadians to determine that we want to be better at what we do, know that we have the talent and go ahead and achieve the results,” he stressed.

Mr. Sinckler stated that Barbados’ levels of efficiency, policy framing and implementation and overall productivity were now key variables in determining “if we attract, who we attract, and in what areas we attract desirable investments”.

He expressed the view that there was justification in the concerns about Barbados’ global competitiveness ranking which slipped to 72 out of 138 economies surveyed in 2016-2017. He added that in the Doing Business 2017 Report, Barbados was ranked 117th out of 190 countries overall in 2016.

According to him, officials here have identified some flaws in reporting in those two reports. “We cannot challenge the fact that as a country heavily dependent on international trade…for domestic consumption and production, we must commit to simplifying and streamlining existing regulations, behaviours and practices that impact business and trade facilitation,” the Minister stated.

The Barbados Competitiveness Programme started in 2010 and the US$11.8 million project was funded by Government and the Inter-American Development Bank. It was designed to address key bottlenecks being experienced in relation to the efficient movement of goods in and out of Barbados, private investment, productivity and the general business climate.

The project was also expected to enhance Government’s tax and incentives policy mechanisms while seeking to initiate a process to formally institutionalise matters related to competiveness.