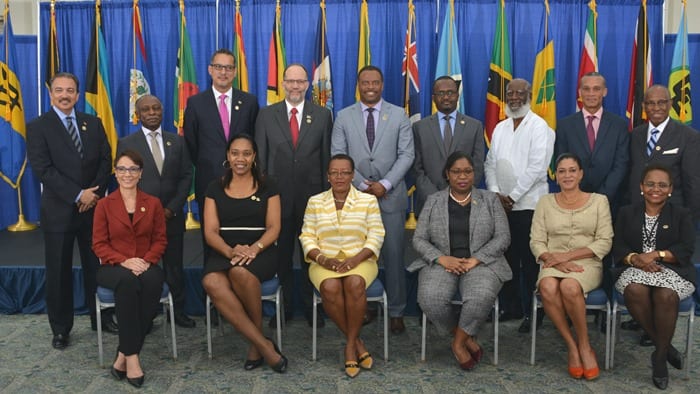 CARICOM Ministers of Foreign Affairs, representatives of Ministries of Foreign Affairs, CARICOM Secretary General Ambassador Irwin LaRocque and other officials pose for a group photograph at this morning’s opening ceremony of the 20th COFCOR Meeting at the Lloyd Erskine Sandiford Centre. (B.Hinds/BGIS)

The present and future global environment demand that the Caribbean Community (CARICOM) engages in a process of “evaluation, revision and consolidation”.

This advice was given by Minister of Foreign Affairs and Foreign Trade, Senator Maxine McClean, while addressing the opening ceremony of the Twentieth Meeting of the Council for Foreign and Community Relations (COFCOR), at the Lloyd Erskine Sandiford Centre, this morning.

Senator McClean, the incoming Chairman of COFCOR, told her fellow Foreign Affairs Ministers: “It is imperative that we deepen and strengthen community engagement and, as a cohesive body, leverage our voices as one to derive maximum benefit for the region”.

She stressed that recent political developments in the hemisphere and Europe involving long-term CARICOM partners would likely have “a profound impact” on the region.

“The imminent exit of the United Kingdom (UK) from the European Union (EU) will generate domestic and foreign policy changes in the United Kingdom. These, in turn, will affect the countries of CARICOM, given the deep and long-standing historical relationship.

“The extent of the impacts on economic, trade, and political relations, as well as development assistance between the UK and CARICOM, will be determined by our preparedness and our coordinated efforts to shape our future relationship with the United Kingdom,” she pointed out.

She also noted that to date, the United States (US) administration had not formulated a policy for engaging the region; however, current US policies were “already having an impact on our sustainable development priorities and aspirations”.

The Foreign Minister said the region must devise a clear policy on how they will engage with the EU following the exit of the United Kingdom, as well as the Africa Caribbean Pacific-European Union relationship after the Cotonou Agreement expires in 2020.

She also highlighted the issue of climate change, which she stressed was a “priority issue” for CARICOM. “We also have to determine what effect the new stand of the United States administration on climate change may have on the objectives of the 2015 Paris Agreement on Climate Change and other efforts to mitigate climate change,” she stated. 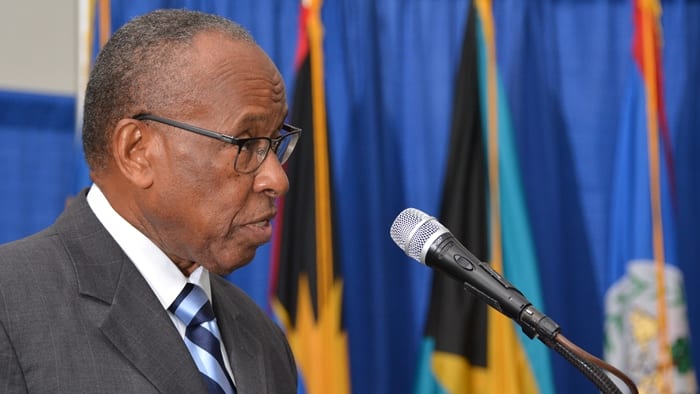 “In order to be effective within this new and emerging landscape, CARICOM as a unified body must ensure its ability to leverage its position on various thematic issues that are achievable and supported by strong political will.

“As such, the Community must guard against insular postulation by fellow members to the disadvantage of any member state within the Community,” he advised.

Following the opening ceremony, the CARICOM Foreign Ministers engaged in the first plenary session and a retreat. The meeting will conclude tomorrow, Friday, May 19.

The COFCOR meets formally once each year and is responsible for determining relations between the Community, international organisations and Third States.