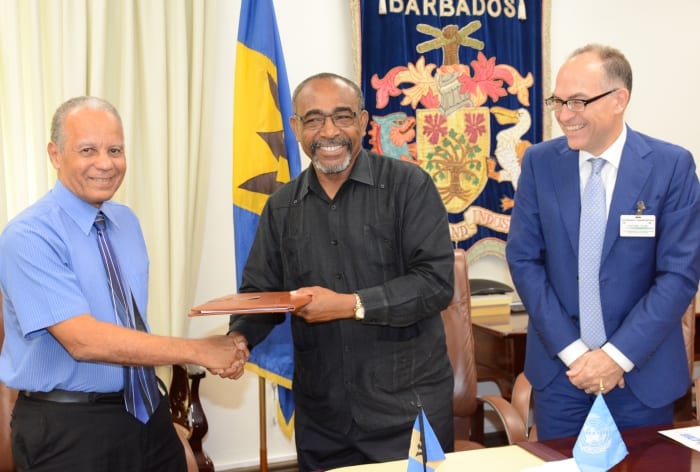 Independent power producers interested in supplying electricity to the national grid will be able to apply for licences by early in the New Year.

Minister with responsibility for Energy, Senator Darcy Boyce, disclosed this today and added that recommendations on licensing systems for these producers should be in hand by the end of the year.

He further revealed that proposals for pricing of renewable energy would also go before the Fair Trading Commission early next year so that “we can give certainty to investors of what they will earn”. Recommendations on pricing will be made after stakeholder consultation, he added.

Senator Boyce was speaking at a signing ceremony at Government Headquarters between the Division of Energy and Enermax Limited to facilitate the installation of solar photovoltaic systems at 28 community centres and nine polyclinics.

This project, which will be implemented over the next three months, forms part of the Disaster Risk and Energy Access Management (DREAM) Project funded by the Global Environmental Facility (GEF) with project support from the United Nations Development Programme (UNDP).

Its primary objectives are to reduce greenhouse gas emissions through the use of renewable energy and to strengthen Barbados’ disaster risk response by promoting decentralised photovoltaic electricity generation with battery back-up.

Senator Boyce said that eventually he would like to see all community centres, polyclinics, the Queen Elizabeth Hospital and all schools with renewable energy systems.

This, he explained, would result in a reduction in electricity costs, provide critical battery support when there were outages and ensure that communities and schools were not impacted in carrying out their programmes because of high electricity bills.

The Energy Minister said that the Division of Energy will also be collaborating with the Ministry of Education to further expand this initiative into schools.