Independent Statistical Institute Should Be Set Up 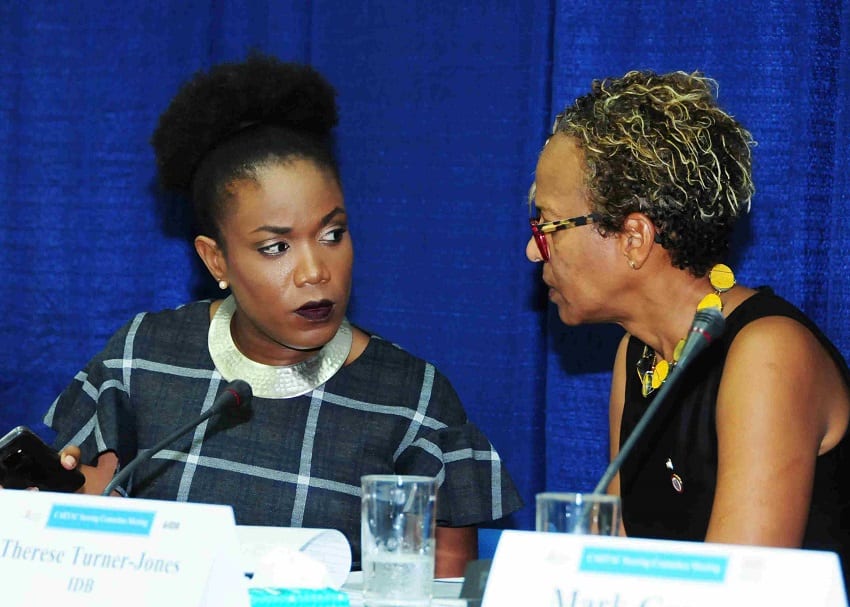 General Manager, Country Department Caribbean Group, IDB, Therese Turner-Jones has the ear of
Minister in the Ministry of Economic Affairs and Investment, Marsha Caddle, at the opening of the CARTAC Steering Committee Meeting at the Lloyd Erskine Sandiford Centre today. (B.Hinds/BGIS)

Barbados should seek to establish an independent statistical institute which reports to Parliament, and by extension, citizens, on key economic and social indicators.

This view was expressed today by Minister in the Ministry of Economic Affairs and Investment, Marsha Caddle, as she delivered remarks at the opening of the Caribbean Regional Technical Assistance Centre (CARTAC) Steering Committee Meeting, at the Lloyd Erskine Sandiford Centre.

Ms. Caddle told her audience: “Such an institute can also produce data products that will allow the private sector to be able to do the kind of research that will allow it to grow, develop new products and find new markets. In the third decade of the 21st century, this is what a statistical entity in any country should make its primary business….

“We have said that we believe the work of the national statistical system will have more freedom to do what it needs to do if it is established as an independent statistical institute.”

She said Government was not where it wanted to be in terms of having an integrated approach to generating and disseminating information. She suggested that the availability of local and regional expertise in this sector, as well as the giving of incentives to people to study and work in the field, were among the things that could be considered.

Ms. Caddle pointed out that in the last five months Government was able to move from a position where there was very little data being generated and shared, even on such things as the foreign reserves, to an increase in information.

“[Now] I certainly get in my email every morning a daily picture of the reserves position and other economic indicators and so we have been able to quickly turn around quite a few things. We’ve increased the level of financial reporting by state-owned enterprises such that they are providing monthly statements of account and this was not previously happening over the last 10 years and so we have been able to have a few successes.

“But what we need is a level of data production and sharing that makes our work predictable such that we have the confidence that we know that we will be able to predict where certain indicators are going and what are the policy options that we have to address all kinds of things, from how we treat with health and education and other social indicators, to poverty, expenditure and revenue. We need to have a complete picture of economic data and of social data in order to do our planning,” she suggested.

Ms. Caddle said Government was of the view that there was a need for a panel of negotiators to review contracts. According to her, the panel would make sure that Government was in the best possible position to defend its practices, engage in its financial obligations with other parties and ensure there was transparency and accountability in the process.

She noted that the Government of Barbados had benefited tremendously from CARTAC’s support in tax administration and policy and public financial management.