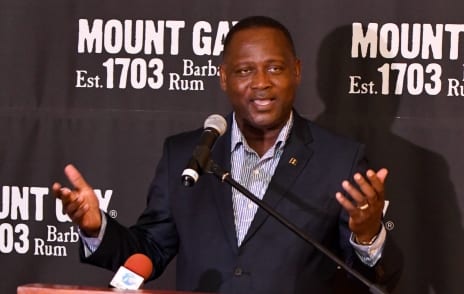 The Remy Cointreau Group has received several accolades for its commitment to Mount Gay and the enrichment of a legacy started by the Ward family of Barbados.

Minister of Industry, International Business, Commerce and Small Business Development, Donville Inniss, was the one bestowing the honours on the group, considered majority shareholders of Mount Gay Distilleries Limited, during a dinner in their honour, at Clifton Hall Great House in St. John.

Acknowledging Government’s appreciation for their immense contribution and investment in Barbados, he told the group: “You have certainly picked a product, since 1989, that really reflects what is very strong and unique about Barbados and we certainly welcome this investment and faith in our economy and people, coming from your side and France. I believe every time we sip some rum we really and truly are appreciating all that is good about Barbados – our pride and industry and the innovation of our people.”

Barbados, he added, was fortunate to have found “a genuine and supportive partner” in Remy Cointreau with its own long, rich history and family tradition like the Ward family. Noting this had been passed down from generation to generation, he said it represented “a burning desire to really conquer the world, in terms of the distribution of fine products”.

Alluding to the success of the rum industry, Mr. Inniss said Barbados appreciated the contribution it had made and continued to make to the economy as a whole, and the significant role of Mount Gay.

“I know between 2012 and 2016, we would have exported about $90 million in rum to the European market (just the EU); we believe with your strong support and the way in which the Mount Gay brand has been growing that that number should certainly double within the next five years.

“…We certainly recognise that we have a unique partnership here between Remy and Mount Gay, one that is a couple centuries together and you have really focused on growing the industry out, growing the product out; and we certainly want as you take this forward to appreciate that you are helping us to increase the footprint of Barbados around the world,” he declared.

The Industry Minister also had a word of advice for Barbadians. He urged them to be extremely proud of what is produced here noting that sometimes our products were really appreciated outside of our shores much more than on the island and Mount Gay was one such.

Expressing his own appreciation for the brand, he told the shareholder group: “You could have found other places and products but the fact that you’ve shown this commitment to Barbados means a lot to us. I am satisfied that your efforts are not going to just redound in the growth and expansion of the Mount Gay brand but certainly will take along with it Barbados as a brand around the world – a brand that is known for commitment to cause, industrialisation, the best at innovation and all that is pride and industry, not just captured in a bottle but in us as a people.”

Chairman of Remy Cointreau Marc Heriard-Dubreuil, in detailing the investment, said it now included a plantation. Stating that this also reflected they were “long-term minded”, he stressed: “We have really worked on that project for the last 30 years, which means that we are dedicated now as we have the full power of having the plantation, the distillery, the inventory and the distribution. So, we are dedicated to developing Mount Gay Rum even more and, you can be assured that it can be at least for the next 30 years.”