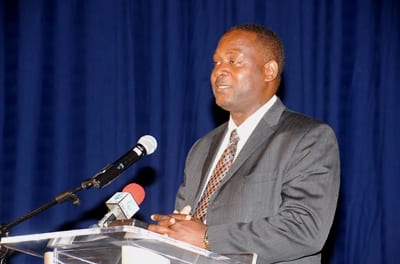 ‘Leadership in the industry’ as well as the shareholder concept by Williams Industries Inc. (WII), were lauded recently when that company held its 20th Awards Dinner at Almond Bay Caterers, Hastings, Christ Church.

Even as staffers were recognised as new shareholders, the Group’s Chairman, Ralph “Bizzy” Williams, came in for praise from Minister of Industry, International Business, Commerce and Small Business Development, Donville Inniss, who commended the “patriotic Barbadian”, “unsung hero” and “trailblazer” for his sterling contribution and continued confidence in the Barbadian economy and people.

Acknowledging the company owed its growth to the “visionary leadership it has had”, sheer determination, intellectual skills and risks taken by its leader, he assured him of Government’s support and applauded the company’s efforts at recognising staff as shareholders.

Noting that the Group’s shareholder concept was an “important milestone”, Mr. Inniss lamented that Barbadians had not yet reached that point of appreciating what it meant to be a shareholder.

He said: “Sad to say, 51 years after Independence, some people in this country still reflect upon their salaries, allowances and benefits they are paid and do not focus on becoming a shareholder. And to me, there is nothing more important in your career development than becoming an owner rather than just focusing on being an employee….

“When you are a shareholder or when you aspire to be a shareholder, you invariably go the extra mile; you stop thinking of yourself, just as someone who will receive a pay check at the end of the month or week, and as someone who is now making an immense contribution towards the growth and development of the company.”

Congratulating all shareholders in WII, he urged them to pass on the important lesson of becoming a shareholder in a private company, to their generation/offspring. To those who were not yet shareholders, he called on them to appreciate what it took to start, grow, develop and sustain a business in any society.

Mr. Inniss further appealed to all companies here to build a brand and know what their company stood for. Stating it must not be about mediocrity or poor customer service, he remarked: “Once you have established those principles, your company would only grow from strength to strength.”