Passengers using Barbados’ ports of entry should soon see an improvement in the time it takes to get through Customs and Immigration.

Speaking at the opening of a border security training workshop for Immigration and Customs officers, Senator Boyce said that shift systems at the ports of entry would be redesigned to ensure that the Customs and Immigration counters were fully staffed during peak periods.

In addition, he has asked that discussions be held with the Ministry of the Civil Service and trade unions to facilitate the process.

The Ministry is also continuing to work on an initiative which involves the installation of 14 Automated Passport Control (APC) kiosks in the Arrivals Hall at the Grantley Adams International Airport, aimed at significantly decreasing the waiting times of arriving passengers in the terminal.

The kiosks, which, according to the Minister, are expected to be activated later this year, will give passengers the option of inputting the required Customs and Immigration information electronically. International airports using the system have reported a 40 to 50 per cent drop in the wait times, Senator Boyce told his audience.

Another initiative expected to help improve security and processing times, the Minister revealed, related to the provision of advanced passenger information by carriers coming into Barbados, and the Ministry was working to ensure that this was effectively provided.

He added that work was also ongoing on a project to provide technology which would enable the Customs Department to improve and increase surveillance of luggage and cargo in less time in order to improve security and increase facilitation. 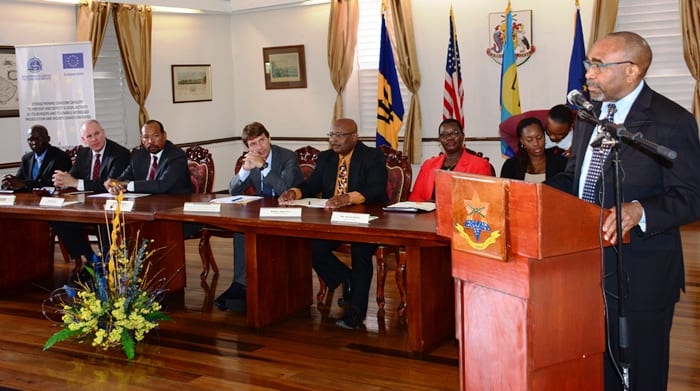 Minister with responsibility for Immigration, Senator Darcy Boyce, speaking at the opening of a border security training workshop for Immigration and Customs officers today. (A.Miller/BGIS)

Senator Boyce told the workshop participants that relevant training also remained a priority and, in addition to the current workshop, other training opportunities were forthcoming in areas such as fraudulent document detection and e-passports.

The week-long border security workshop is sponsored by the CARICOM Implementation Agency for Crime and Security (IMPACS), in collaboration with the European Union and the United States Customs and Border Protection.

It will also enhance the capacity of border security officials to identify and intercept persons, goods or vessels travelling across borders by illicit means or with illicit intent; improve screening techniques to reduce wait times at checkpoints; and reduce litigation and poor publicity that might result from interaction with immigration or customs officials.