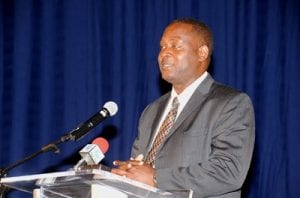 A call has been issued for Barbados to become more efficient in receiving goods at its ports of entry.

This came from Commerce Minister, Donville Inniss, during a wide-ranging discussion with members of the Barbados Customs Brokers and Clerk Association over the weekend.

Mr. Inniss pointed out that being more efficient was all part of the strategy to enhance competitiveness in the wider economy and society, ultimately resulting in containing the cost of living and doing business in Barbados.

At present, approximately 69 per cent of all containers were inspected by the Customs Department, and it is projected that by 2031, the number of containers inspected would be reduced to 15 per cent through the use of the Central Cargo Examination Facility, utilising risk-based methodology,

Stating that he was “ever mindful” that some persons will resist change, no matter how good that change may be for the wider society, Mr. Inniss pointed out that he was far more worried about delays in receiving goods and the attendant direct costs of demurrage, spoilage, labour and finance costs.