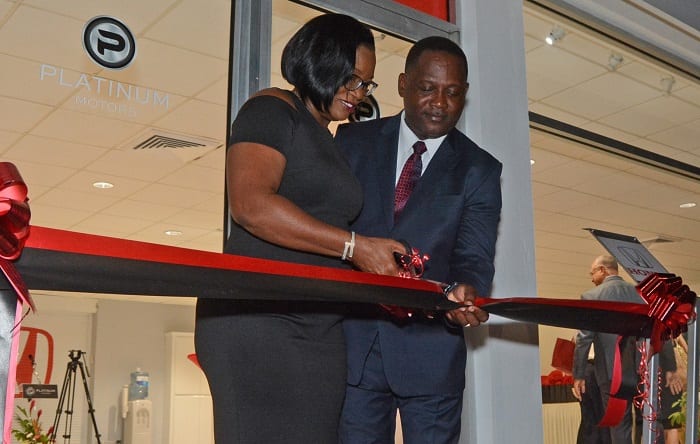 Commerce Minister, Donville Inniss has reiterated the need for Barbados to earn and save valuable foreign exchange wherever possible.

Speaking last night at the official opening of the fully-renovated Platinum Motors, the new home of Honda Barbados on Fontabelle, Mr. Inniss stated that the island could no longer tax or borrow its way out of its circumstances but had to learn how to earn its way out of it.

Explaining to his audience that Barbados was currently importing an average of 395 vehicles per month at an average expenditure of almost $10 million, Mr. Inniss was quick to point out that the invoices for the importation of vehicles were settled in US dollars primarily.

“Perhaps we will get a better grasp of why the report issued by the Central Bank recently was so timely and relevant…. Less I am misinterpreted, I am not suggesting that we curb the importation of motor vehicles but rather that we remind ourselves as to the need to earn and save foreign exchange,” he clarified.

The International Business Minister noted that when he added the expenditure on fuel imports, as well as the importation of parts and other supplies, one had a better appreciation of where a lot of the country’s foreign exchange was going.

“A lot of it goes in the vehicles we drive. We are currently spending in excess of $1 billion per year on the importation, fuelling and operation of vehicles in Barbados. I do not foresee any significant decline in the expenditure on vehicles, in the short to medium term. Therefore, our task must lie in how we can earn the money to pay for the vehicles we own and operate, whether they are public or private sector owned and operated,” he said.

Meanwhile, General Manager of Platinum Motors, Mark Hamilton, stated that the improved features were all part of the bigger picture for the company “to maintain Honda’s reputation as a premium brand in Barbados”.

“As we continue to move forward and build our business, we are committed to securing our place as a serious player within the local automotive market, whilst never losing sight of our customers’ interest,” he affirmed.