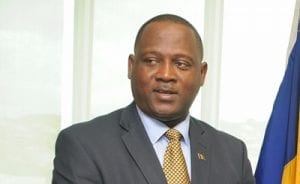 Addressing the Institute of Chartered Accountants of Barbados’ (ICAB) Student Conference today at the Lloyd Erskine Sandiford Centre, he said: “Over the past 50 years or so, Barbados’ growth and development have been based on an economic model which placed much emphasis on preferential access to markets of

Barbados’ principal trading partners, incentivised tax regimes for the foreign investor designed to inject foreign exchange earnings into the economy, and high protectionist barriers, implemented to give fledgling local enterprise the necessary space to become sustainable. This model is becoming obsolete as evidenced by demands by international standard setting agencies to dismantle these systems which have, up to a certain point, served our economy well.”

Participants heard that the rapidity of change within the technological revolution had also impacted on the global economy, particularly the financial system. Mr. Inniss added that this revolution had been able to impact positively the high cost, security and reliability of financial services which has, in turn, resulted in the growth of business and prosperity.

“Conversely, the relative ease and speed with which financial transactions can now take place have resulted in phenomenal increases in cases of financial crime. It is this ease in the geographical mobility of finances which contributes to the increased complexity of the regulation of financial services. We as regulators and policymakers are, therefore, forced to keep pace with technology to secure our jurisdiction, as well as to improve the services we offer to investors,” he stated.

The Minister also noted the collaborative efforts the International Business Division was engaged in with the Organisation for Economic Cooperation and Development (OECD) and the Caribbean Financial Action Task Force (CFATF) and said while the work with the OECD focused on tax transparency and Information exchange, and base erosion and profit shifting, the work with CFATF centered primarily on Barbados’ ability to fight money laundering and combat terrorist financing.

Explaining further that the work of these two bodies examined Barbados’ regulatory and supervisory frameworks and compliance with agreed international standards, the International Business Minister stressed: “Over the next year, much work will be required to strengthen regulatory frameworks through amendments to legislation, which will seek to ensure the sustainability of our sectors, while adhering to those international standards to which the Government of Barbados is committed.”