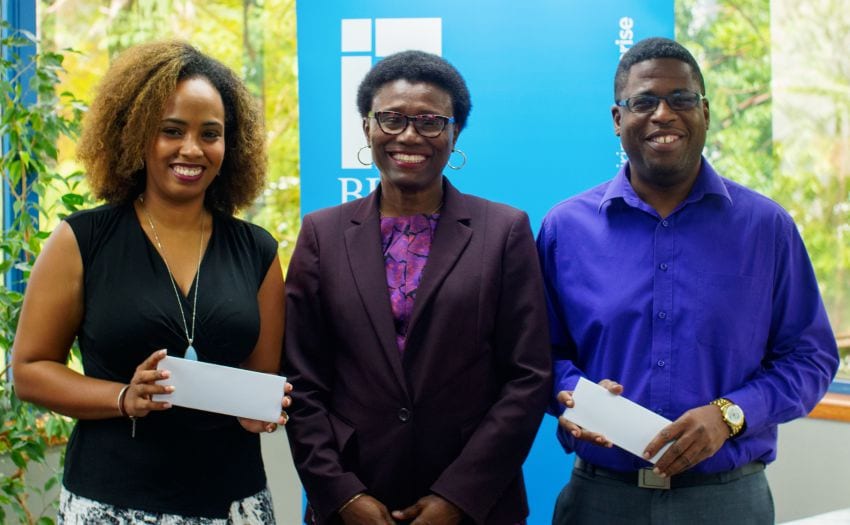 Chief Executive Officer of the BIDC, Sonja Trotman (centre), poses with Kelly Jonally and Terry Jones (who was representing Sabrina Greenidge). Kelly and Sabrina, who attended the Innovate Barbados Conference 2018, won tickets for a trip to any COPA Airlines destination in the Caribbean or Central America. (BIDC)

Two lucky persons, who attended the recently concluded Innovate Barbados 2018 conference, won a trip to any COPA Airlines destination in the Caribbean or Central America compliments of that event’s sponsor, COPA Airlines.

The winners are Kelly Johnally and Sabrina Greenidge. They were officially handed their tickets during a brief presentation on Tuesday at the Barbados Investment and Development Corporation (BIDC), Princess Alice Highway, St. Michael.

Ms. Johnally won the Social Media Challenge when her 50-word post about her experience at Innovate Barbados 2018 received the most likes on Instagram.

She shared photos of an expert’s presentation and branded memorabilia along with images of her posing at the Innovate Barbados bus stop and in a solar-powered vehicle which was on display.

In her post, Ms. Johnally said: “I had a great first day at Innovate Barbados 2018. The sessions were refreshing, concise and challenged my perspectives. My main take away from today… we can all win in our own lane… there is room for all of us at the table when we are creative and inclusive in our thinking.”

Ms. Greenidge, who was represented by Terry Jones at the ticket presentation, was the first to complete every activity in the Innovate Barbados Scavenger Hunt.

In congratulating the winners, Chief Executive Officer of the BIDC, Sonja Trotman said: “It definitely paid to be active on social media during the Innovate Barbados conference.”

She explained that Innovate Barbados is the BIDC’s annual signature event which seeks to unleash transformative ideas and develop exponential enterprises. The event also aims to bring together persons with ideas and resources into a single space to make strategic connections.

Ms. Trotman also lauded Copa Airlines and 26 other companies for sponsoring Innovate Barbados. She called the sponsors “Champions of Innovation” and said they “shared the vision of making Barbados an innovation destination”.