Insurance Defaulters Urged To Pay Up 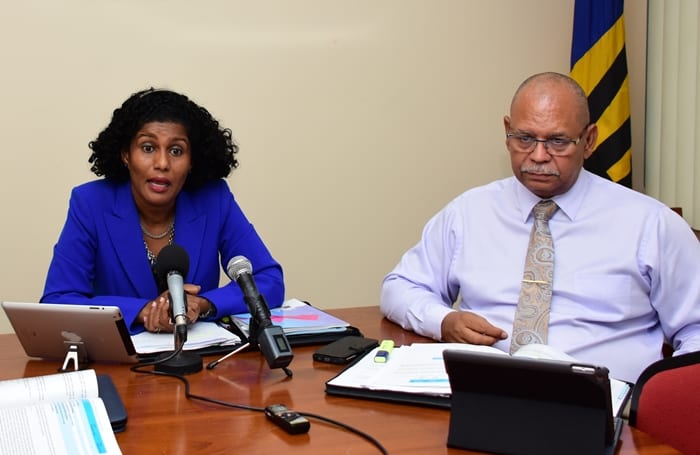 This country’s Minister of Labour, Social Security and Human Resource Development, Senator Dr. Esther Byer Suckoo is urging those private sector entities and self-employed individuals who are indebted to the National Insurance Fund to pay up.

She made this appeal last Friday, during a press conference to release the 15th Actuarial Review of the National Insurance Fund, Unemployment Fund and Severance Fund at the Ministry’s Warrens Office Complex, St. Michael location.

The Labour Minister told reporters that together, government and the private sector were indebted to the National Insurance Fund to the tune of $650 million.

She added: “Those who owe the National Insurance Department need to come in and address those arrears.  The Government of Barbados is in discussion with the National Insurance as to how they can do this….I am also mindful that the private sector owes just about as much money as the public sector does in terms of arrears so I would encourage the private sector to also make good on that payment as well.”

Pointing to the successes of the previous interest waiver programme, Senator Byer Suckoo said that programme collected $11.9 million from approximately 147 employees and waived $7.8 million in interest between October 2016 and March 2017

The Labour Minister disclosed that another interest waiver programme was being proposed and expected to be approved by Parliament to run from October 2017 to January 2018 to encourage defaulters to pay.

“We are encouraging persons who are in arrears to take advantage of this waiver programme because we see that contribution as very necessary to the sustainability of the National Insurance, Byer Suckoo stressed, adding that self-employed individuals were not willingly coming forward to pay their contributions.

The Minister said apart from the interest waiver programme, other options such as flexibility of payment schedules, lump sum payments and paying online could be offered to assist self-employed persons to make their payments.

NIS Director, Ian Carrington is optimistic that the new interest waiver programme would produce similar results to that which was achieved with the previous waiver.