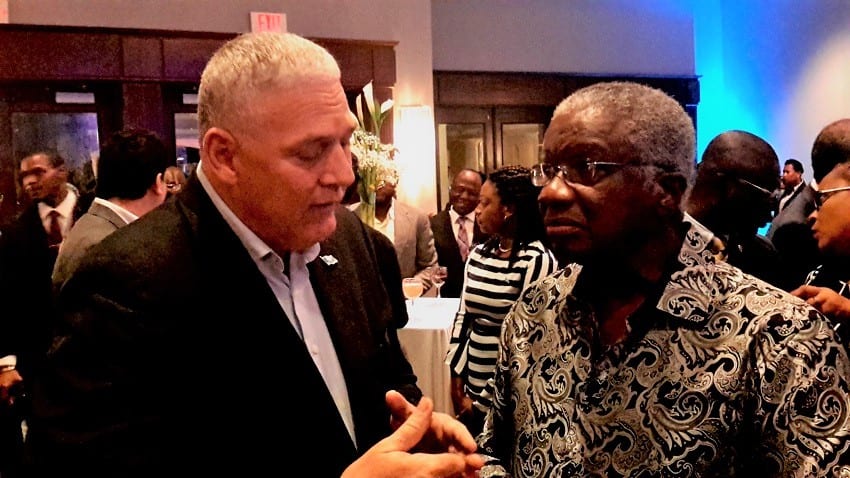 Prime Minister Freundel Stuart in discussion with his St. Lucian counterpart, Allen Chastanet at the reception to open the 29th Inter-sessional Meeting of the Conference of Heads of Government of CARICOM on Sunday, February 25 at the Karibe Hotel in Port-au-Prince. (GP)

Prime Minister Freundel Stuart has described this year’s Inter-sessional conference as vital to Barbados in terms of advancing regional integration.

He made this assertion on Sunday as he spoke to the Barbados Government Information Service prior to the start of the Twenty-Ninth Inter-sessional Meeting of the Conference of Heads of Government of the Caribbean Community (CARICOM), which is being held in Haiti from February 26 to 28, at the Marriott Hotel.

Mr. Stuart said: “The state of the regional integration movement is always a matter of importance to Barbados given our very deep commitment to this movement.  [And] as one of the founding members of it, we are always interested in ensuring that … there are tendencies towards consolidation in CARICOM. So, the overarching concern of Barbados is that the regional integration movement be strengthened.”

He acknowledged that because of the state of the world economy over the past decade and its impact on the region, there was a tendency towards being inward- looking in CARICOM, as Member States “tried to look after their own business”. This, he said, often resulted in regional matters taking “second, third or fourth place”.

In addition, he noted that the Government of Jamaica conducted a review of the Caribbean Community and the CARICOM Single Market and Economy, from its perspective, to see whether these arrangements were working in such a way that would justify that country’s continued involvement in the regional body.

Mr. Stuart said the report was receiving the attention of Heads of Government, noting that they should have some preliminary indications as to what actions needed to be taken “to strengthen the movement to ensure that it meets the expectations of Member States of CARICOM”.

The CARICOM Single Market and the Economy is one of the key items on the agenda at the conference.