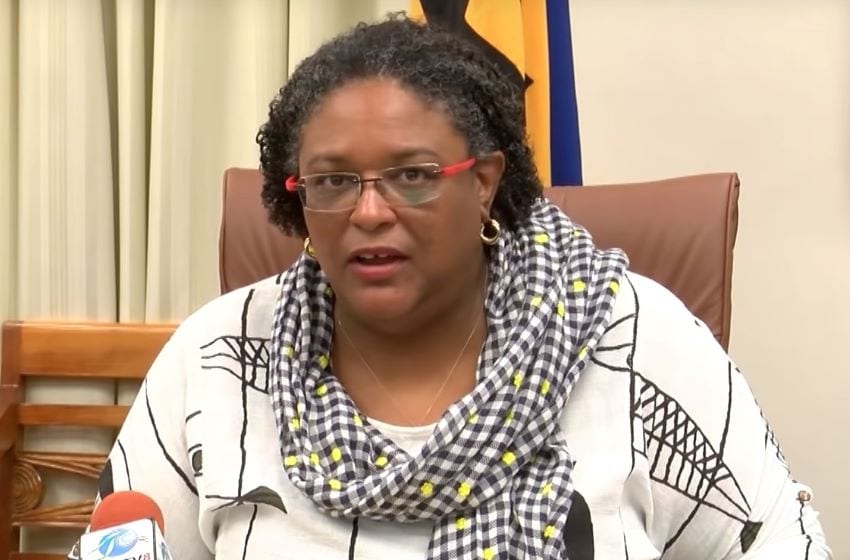 Prime Minister Mia Amor Mottley discussing her recent trip to the United States and Canada for a series of high-level meetings. (BGIS)

Prime Minister Mia Amor Mottley has disclosed that government is in discussions with The Nature Conservancy about the possibility of doing a maritime debt for nature swap.

Ms. Mottley made the disclosure today during a press conference at Government Headquarters, where she discussed her recent trip to Canada and the United States of America for a series of high-level meetings.

She explained that a debt for nature swap meant that the organization would take certain amounts of the country’s debt and the reduction in the cost of the debt would go to a trust that would be formed to take care of the maritime environment.

“So, they will use the income from the trust to help and work with fishermen, …the rebuilding of the coral reef…to ensure they are taking care and preserving the maritime environment.

“It is a completely new dimension.  The only country in the world to have entered such an arrangement has been Seychelles and now Grenada has been in intensive discussions with them for some time.  But we hope to be able to bring this resolution over the course of the next few weeks, and to work towards the development of the planning out of a marine spatial plan that would allow all of the stakeholders to come. This will not preclude any activity, so Barbados can still ostensibly pursue its oil and gas blocks on the deep south eastern waters in the exclusive economic zone, but it just allows for order in the development,” she explained.

Headquartered in the USA, The Nature Conservancy is a charitable environmental organization, which has as its mission to “conserve the lands and waters which all life depends”.

Ms. Mottley said Barbados’ maritime jurisdiction is 424 times the size of its land base, which is 166 sq. miles.

Describing the visit to Canada as “highly successful”, she said the clear message was that at all levels “the Canadian business sector is still very much engaged with Barbados”.

She noted that Barbados was developing a regulatory framework for medical cannabis, and there was great interest in this area when it was discussed in Canada. She pointed out that this country would have to make some amendments to its legislation, and the Attorney General would deal with that in due course.

The Prime Minister stated that during her Washington, D.C. trip, she met with foreign creditors to discuss debt restructuring.  She disclosed that government would be making statements on that matter in a few weeks’ time.

She added that in Miami, the Barbadian officials met with the Florida Cruise Ship Association, the President of Royal Caribbean International and his senior team, as well as other senior representatives of the cruise ship industry, and details about those meetings would be made known within another two weeks.