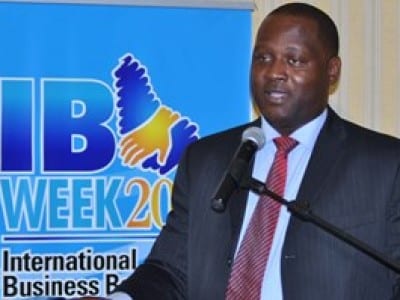 The Minister lamented that although the sector makes such an “important contribution” to the “lifeblood of the economy”, not many people truly understood its role and function.

He made these commnents recently at the opening ceremony of the International Business Conference at the Hilton Barbados Resort.

He stated that too often, many of our citizens had the belief that international business was far removed from the average Barbadian, and a sector in which only the affluent were directly involved.

The Minister told attendees: “Let me take this opportunity to underscore, that despite the various challenges it may face, Barbados’ IBFS sector continues to play a significant role in the economic and social development of our country.”

Adding that it was the second largest contributor to the country’s Gross Domestic Product (GDP) and second only to tourism, Mr. Inniss pointed out that apart from contributing almost 10 per cent to this country’s GDP, the sector had also generated thousands of local jobs across the nearly 4,000 active international business entities.

He said: “Each year, these entities pay corporation and other taxes, licence fees, as well as salaries, rents, utilities, entertainment and other local expenses and this revenue helps to drive our economy.”

Stating that based on evidence, the sector was not only for the rich or the well off, Mr. Inniss stressed that there was “no doubt” in his mind that this sector has a multiplier effect, as it touched so many other areas of economic activity across Barbados.

Some of the areas he highlighted were real estate; professional services such as accounting, legal and tax; hospitality; construction; information and communication technology, and education industries.