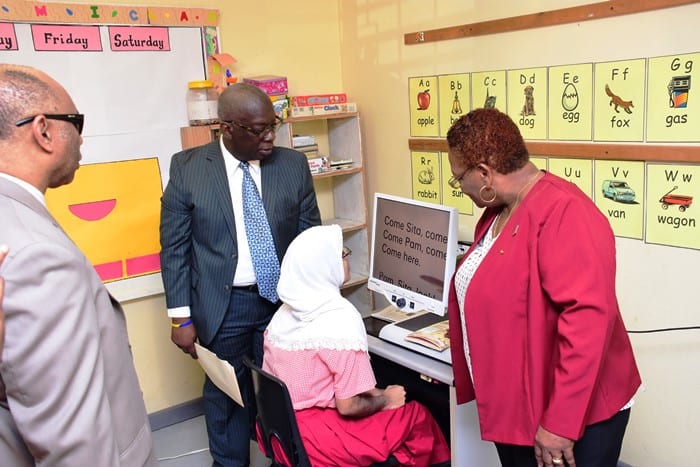 Richard Phipps, a Barbadian living overseas, and one of the recipients of the Barbados Jubilee Honour, has given back to the island.

His philanthropic gesture came today as he presented a Merlin Vision Enhance Machine to Education Minister, Ronald Jones, on behalf of the Irving Wilson School, at its Pine Plantation Road location in St. Michael.

Mr. Phipps an active member of the National Association of Barbados Organisations, and Past President of the Barbadian Cultural Committee of Boston, said the machine would allow students with impaired or limited vision “to do a variety of exercises relative to their activities”.

He added that it would also aid their reading and extend beyond academics to what other activities they wanted to pursue.

Mr. Jones first congratulated Mr. Phipps on his award and noted his contributions to Barbados. He said: “I am pleased you have been able to achieve so much in your life. And you are recognised for the promotion of arts and culture in Massachusetts and your participation in Barbadian organisations. That to me says you are a well-rounded human being.”

While thanking the philanthropist for the donation to the Irving Wilson School, the Education Minister said he was always pleased when individuals and other entities were able to reach out, especially to schools, and give back.

“There are always needs to be met. Government spends a lot of money on education but that is still never enough, and in every society that tends to be the case because there are always other demands within the system.

And, those who can come forward and give help in kind or in cash [are] truly appreciated by the Ministry of Education, the Government and, of course, the people of Barbados,” Mr. Jones remarked.

The equipment was handed over to the students, who showcased their skills in the presence of the principal, Wendy Blackman, and her staff.