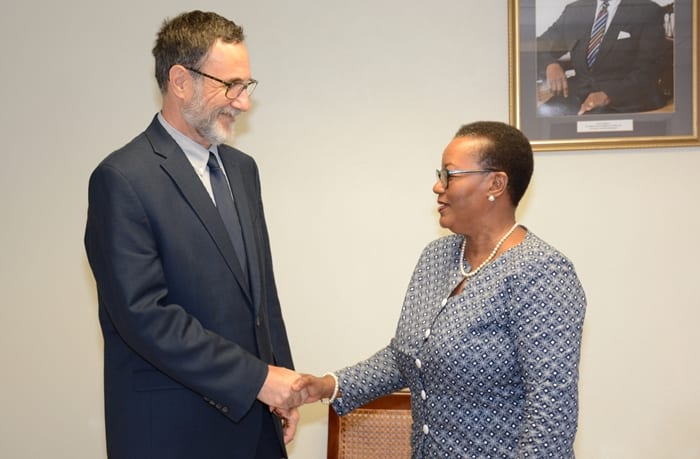 Ambassador of the State of Israel, Mordehai Amihai Bivas, believes there is a lot that can be done bilaterally between Israel and Barbados, and by extension, the region.

During a recent courtesy call with Minister of Foreign Affairs and Foreign Trade, Senator Maxine McClean, Mr. Bivas disclosed that Israel was ready to “do more and invest more”, as Barbados is viewed as one of the leading countries in the region.

Mr. Bivas, who was visiting the island to attend a recently concluded film festival at Limegrove Cinemas, explained that it was the first time the countries had collaborated for a cultural activity and said it should be done more often.

Senator McClean agreed and said she believed it would be a good opportunity, especially since the Government of Barbados was “pushing cultural studies”.

She added that they should also explore the possibility of an Israeli professor visiting the island to host several workshops for UWI Cave Hill students pursuing film degrees.

The two officials also discussed the final preparations being undertaken for the upcoming Caribbean Israeli Technology Conference and Exhibition, which will be hosted from June 7 to 8 at the Hilton Barbados Resort.

Barbados and the State of Israel formally established diplomatic relations on August 29, 1967, and will be celebrating 50 years of relations later this year.