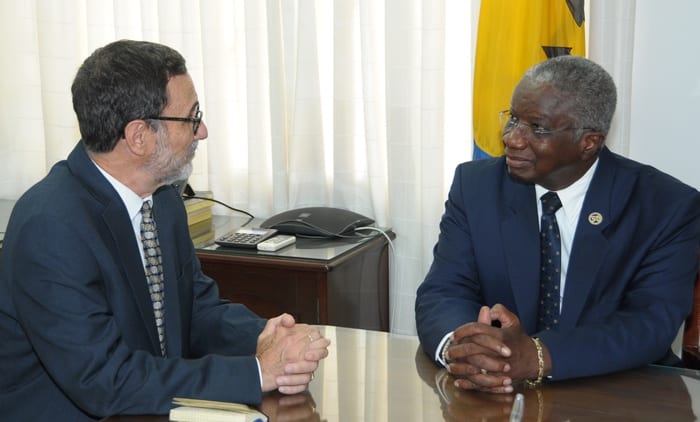 Non-Resident Ambassador of Israel to Barbados, Mordehai Amihai-Bivas, paid a farewell courtesy call recently on Prime Minister Freundel Stuart, as he ended two and a half years of service to the region.

The Ambassador described his tour of duty in the Caribbean as “wonderful” and noted the similarities between Israel and the region in areas such as respect for human rights, democracy and the rule of law.

In respect of Barbados, he said that during his tenure, Israel had facilitated a number of programmes, including training at the Queen Elizabeth Hospital through an Israeli medical team, a technology seminar and a film festival. It would also be providing training in water resource management in October.

The Israeli diplomat said that Israel intended to build on its relationship with Barbados and continue to explore the potential in trade, alternative energy, environmental issues and cyber security.

Prime Minister Stuart congratulated the Ambassador on his “very fertile term of office” and thanked him for his service to Barbados. Mr. Stuart noted that Barbados had benefited significantly from Israel’s assistance in terms of scholarships, agriculture, health, and information and communication technology, and looked forward to collaborating in the area of renewable energy.

He also expressed gratitude for the expertise shared with respect to the coastal radar system, which was installed by Israel and continued to be serviced by personnel from that country.

He said the system allowed Barbados to more closely guard its coastline, adding “one of the paradoxes of life in the Caribbean is that whereas the civilian population has generally seen the Caribbean Sea as separating us, the criminal element sees it as an integrative force, so we have had to respond to that and hence the radar system from Israel.”

Prime Minister Stuart also pointed to the transfer of skills and expertise as Barbadians worked alongside the Israelis in implementing the system. He wished Ambassador Amihai-Bivas success in his new posting, which is in New York, where he will be in charge of Israeli Cultural Affairs in North America.