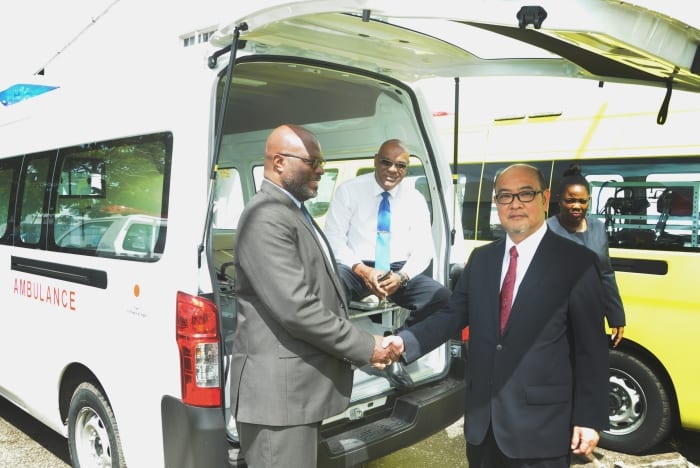 Disaster and emergency response personnel are now better equipped to handle any eventuality, thanks to a donation of equipment from the Government of Japan.

The items, inclusive of emergency response vehicles worth Bds$1.8 million, were officially handed over to the relevant state agencies, following a brief ceremony at the Department of Emergency Management (DEM), Warrens, St. Michael, this morning.

Expressing his “utmost gratitude” to the Japanese Government, Minister of Home Affairs, Adriel Brathwaite, noted that the ambulance, fire tender and two rescue vehicles would be handed over to the Barbados Ambulance Service, the Barbados Fire Service, and the DEM, respectively.

The DEM also received a number of storage bins for other critical emergency items, which will be deployed in each parish. “We want to ensure that if there’s an event, that St. Lucy, St. Philip, etc., can respond at a localised level,” Mr. Brathwaite explained.

The Minister also noted that the donation represented the deepening of bilateral relations between Barbados and Japan. The first CARICOM/Japan Summit, was held in Trinidad and Tobago in 2014.

“Just last year, we executed an agreement with the Japan International Agency for Cooperation…and part of that agreement requires Japan [to provide] technical assistance, by way of personnel, who will be stationed here in Barbados.

Again [this is] a significant contribution in that they want to ensure that we’re better able to respond [to disasters],” he added, acknowledging Japan’s expertise in dealing with natural disasters over the years.

Japan’s Ambassador to Barbados, Teruhiko Shinada, said his country was keen on assisting in this regard, and emphasised the Japanese proverb “when you are better prepared, you have less worries”.

Ambassador Shinada further stated that it was their hope that the grant aid would “raise public awareness in Barbados; improve its preparedness, response and recovery capacities, and thus secure a future of greater resilience for the island”.

In addition to the emergency vehicles, the Japanese Government has also donated a number of other critical items, including tents, tarpaulin sheets, waterproof footwear, megaphones, lighting apparatus and generators.

This morning’s donation is part of $100 million yen (US$900,000) worth of grant aid to help strengthen Barbados’ disaster preparedness and enhance its resilience in the face of natural disasters.